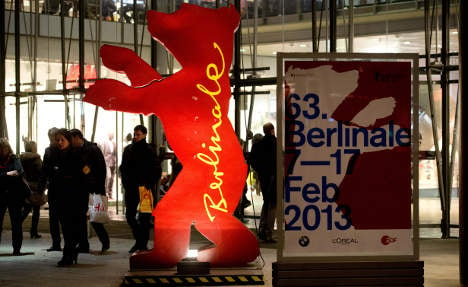 The 63rd Berlinale will open with martial arts epic “The Grandmaster” by Chinese arthouse favourite Wong Kar Wai (“In the Mood for Love”), who will also lead the jury handing out the Golden Bear top prize on February 16.

Nineteen productions including big-budget Hollywood movies, new work by European veterans and a clutch of debut features will compete for the top awards, among a total of more than 400 films at the 11-day event.

Damon teams up with US director Gus Van Sant for the first time since their 1997 Oscar winner “Good Will Hunting” in “Promised Land”, about families pressured to sell their property to fracking companies.

Soderbergh, who has said he is heading into semi-retirement, reunites with Law from “Contagion” and Catherine Zeta-Jones from “Traffic” to present “Side Effects” about pharmaceuticals firms preying on stressed-out Americans.

Deneuve stars in the French road movie “On My Way” about a down-on-her-luck restaurant owner looking for a fresh start. The film is by Emmanuelle Bercot, one of three female directors in competition.

Binoche leads the cast of “Camille Claudel 1915”, about an artist forced into an asylum by her family.

And Huppert plays a mother superior infatuated with a novice in the Diderot adaptation “The Nun”.

Meanwhile “In the Name of” from Poland’s Malgoska Szumowska looks at the struggle of a charismatic village priest with his own homosexuality.

“Many of the films have women in the foreground and many of the films are by women,” Berlinale director Dieter Kosslick said, in a subtle jab at the Cannes festival which sparked protest last year by shunning female directors in its competition.

“Dark Blood”, the last film with River Phoenix, the US rising star who died of a drug overdose at 23 two decades ago, will show out of competition, as will Hawke and Delpy’s final chapter in their slow-burn romantic trilogy, “Before Midnight” by Richard Linklater.

Iran’s Jafar Panahi, a director who has scooped up international prizes for socially critical movies that are banned at home, will present “Closed Curtain”.

Academy Award-winning Bosnian film-maker Danis Tanovic (“No Man’s Land”) returns with “An Episode in the Life of an Iron Picker” in which he turns a and-held digital camera on a Roma village locked in grinding poverty.

South Korea’s Hong Sang-soo will premiere “Nobody’s Daughter Haewon”, the follow-up to his Cannes entry “In Another Country” starring Huppert.

Danish Oscar winner Bille August will unveil “Night Train to Lisbon”, with Irons as a teacher who embarks on a spiritual quest.

And US animators Kirk De Micco and Chris Sanders will offer a first look at the 3-D prehistoric romp “The Croods” featuring voiceovers by Cage and Stone.

France’s Claude Lanzmann, renowned for his groundbreaking 1985 Holocaust documentary “Shoah”, will be honoured with a lifetime achievement award.