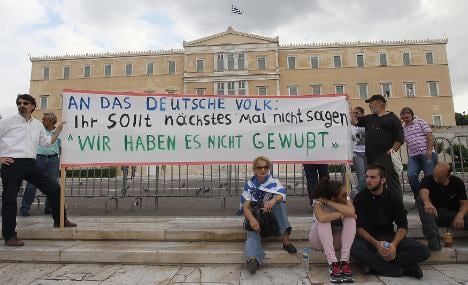 on another country,” Steinbrück told reporters during a visit to Athens.

“This is why Greece needs time to succeed in its stabilization and for people to regain confidence,” the former finance minister said, adding: “Austerity alone cannot bring results.”

Greece is applying a tough economic overhaul for a fourth year running after appealing for bailout loans from the EU and the IMF in 2010.

Many Greeks feel that Merkel-led Germany – which is proportionately footing a key part of the rescue – is responsible for successive cuts to their salaries and pensions to help meet fiscal goals.

“We must see how social cohesion can be maintained,” the centre-left Social Democrat Steinbrück said, noting that Greek salary earners and pensioners had already suffered cuts in their incomes of 30 to 40 percent.

The malaise, coupled with soaring unemployment, has strengthened a radical

leftist party that wants to reject the austerity blueprint, and a neo-Nazi party alleged to be linked to the beating of migrants.