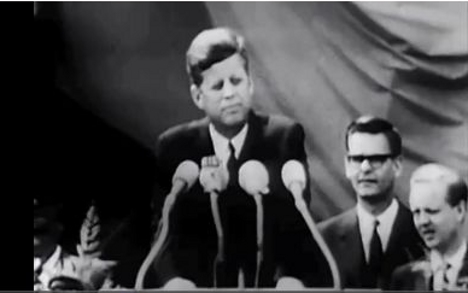 With Obama heading to Northern Ireland mid-June for a G-8 summit of the world’s most important industrial nations, he was considering also making a stop in the German capital, the regional daily Rheinische Post reported on Wednesday citing German government and US diplomatic sources.

“The timing is pretty realistic,” an unnamed US diplomat told the paper, saying a Berlin visit was “likely” considering it would be so close to the anniversary of Kennedy’s speech made on June 26th 1963.

The paper reported that Chancellor Angela Merkel had long hoped Obama would visit Germany before she faces re-election this September. Offering the US leader a chance to hark back to JFK’s address expressing solidarity with West Berliners not long after the Berlin Wall was built would present her with a chance to appear as a worldly stateswoman to German voters.

It would also make good on her snub of Obama before he became president in 2008, when Merkel kyboshed his wish to make a speech in front of Berlin’s iconic Brandenburg Gate.

“The chancellor once again invited President Obama in her note congratulating him on his re-election and she would be please to welcome him here,” he said.