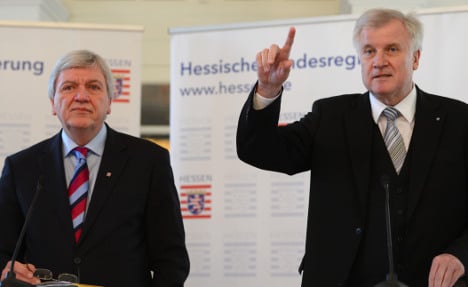 The long-awaited decision to actually take their case to the top court came after the premiers of the two states held consultations in the Hessian state capital Wiesbaden.

Volker Bouffier and Horst Seehofer, the conservative leaders of Hesse and Bavaria respectively, no longer want to prop up the weakest of Germany’s 16 federal states via the fund designed to smooth out wealth disparities.

“The time for a lawsuit has come,” said Bouffier, calling it an “act of political self-defence.”

Currently three states, Baden-Württemberg, Hesse and Bavaria, pay billions of euros each year into the so-called Länderfinanzausgleich. The two leaders have complained the system penalizes richer states for their good economic performance, while poorer states profit from their hard work.

New figures released last month showed Hesse had paid over €38 billion into the pot since 1990, while Bavaria forked over some €36 billion, and Baden-Württemberg handed over €35 billion. The wealthy city-state of Hamburg ponied up €5.2 billion.

With €45 billion from the Länderfinanzausgleich since 1990, the dirt poor city-state of Berlin has received the most. The eastern German state of Saxony came in second after getting €17 billion from the pot, and Saxony-Anhalt received €10 billion. The northern state of Schleswig-Holstein profited the least, receiving €2.4 billion.

Seehofer on Tuesday said the scheme “lacked solidarity, was unfair, and stifled achievement.”

“We in Bavaria have reached a pain threshold for Länderfinanzausgleich,” he said.

But perhaps tellingly, the centre-left state government in Baden-Württemberg has refused to join the constitution challenge.

Critics have noted that both Bouffier and Seehofer face re-election this autumn, and that the court case could be a way to pander to the voters in their respective states.

And other states have pointed out that once-poor Bavaria received payments from the pot for decades.

“I really have no understanding for calling the current rules into question,” said Stanislaw Tillich, the conservative premier of Saxony.