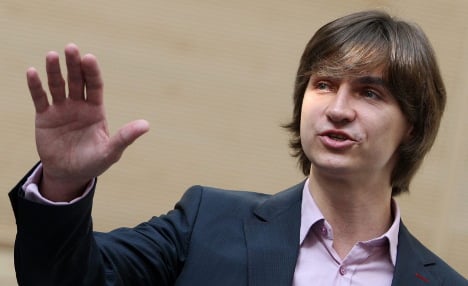 The 42-year-old Sergei Filin has already undergone three operations on his eyes since being rushed to the emergency unit on January 17 after being splashed in the face with acid by a masked assailant.

The incident has shocked the global artistic community and revealed the acerbic infighting and clan politics that continue to haunt one of Russia’s most treasured international brands.

Filin has been replaced on an interim basis at the Bolshoi by the veteran ballerina Galina Stepanenko.

But Filin’s importance to the ballet was confirmed last week when the Bolshoi decided to drop one of its most eagerly anticipated premieres of the year — a new version of Igor Stravinsky’s “The Rite of Spring”.

The artistic director himself appears remarkably cheerful as he metes out almost daily interviews to the world press while bandaged save for a few holes for his eyes and mouth.

The medic said Filin would fly to Germany for further treatment on Monday and now had the option of spending Sunday night at home.

“Sergei Filin has still not decided whether he will go home to spend the night or check out Monday and go directly to Germany,” said Mitichkin.

Doctors say Filin will require several plastic surgery operations and more treatment on his eye in the coming weeks.

Filin has always said that his sight remained his main concern because it impacts directly on his work.

“I never considered myself to be handsome to begin with,” the former principal dancer joked in one recent Russian interview.

It was not immediately clear which German clinic will treat the Russian star. Earlier reports said he was planning to check into an eye treatment centre in the spa town of Aachen.

Russia’s law enforcement authorities are under intense pressure to make progress in the case after both Filin and Bolshoi director Anatoly Iksanov accused someone inside the theatre of being behind the attack.

“I’ve said many times that what happened was connected solely with my work in the Bolshoi,” Filin told the BBC in an interview released on Sunday.

“Of course, I had received threats. I think I had brushed them aside too easily.”

But he also refused to name the suspected culprit despite being “absolutely certain” he knew his or her name.

“I will only speak about this when investigators are ready to announce this,” he said in the BBC interview.

The police had said they would use lie detectors to question witnesses about the incident and have already interviewed Nikolai Tsiskaridze — a top dancer and Russian television celebrity who has fought with Filin for many years.

But both Tsiskaridze — who denies all involvement — and the other stars have refused to submit to the polygraphs as is their right under Russian law.

The decision has only raised further suspicion in the Russian media about the honesty and moral integrity of some of dance’s biggest international stars.

The country’s mass circulated Komsomolskaya Pravda tabloid remarked that “lie detector tests are a standard procedure that are used for the sole purpose of helping the investigation.”