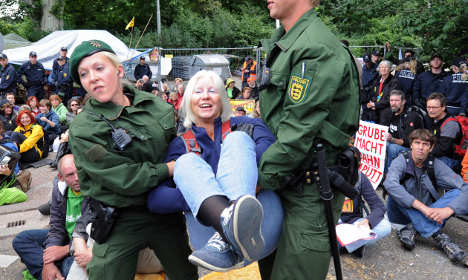 The “Institute for Democracy Research” sent investigators out to the occupy movement tent cities and to the Stuttgart 21 anti-railroad protest as well as to citizen’s initiative protests against construction projects and to anti-nuclear energy demonstrations, said newspaper theFrankfurter Allgemeine Zeitung.

The group found that engineers had replaced social workers in demonstrations and more often than not the activists were male, pensioners or about to be, well educated and either not religious or at most protestant. The group released its report on Wednesday.

“Protestors in Germany come from those who do not have children,” the report said. It said this group was expected to expand between 2015 and 2035, as hundreds of thousands of highly motivated and educated pensioners take to the streets.

The study showed that protests – except when they are about educational topics – are dominated by men. Whoever expected protestors to mainly include those from the lower ranks of the socio-economic rankings would be disappointed.

The researchers found that the average German protestor is “above all a person with a high level of education, with a regular, normally good, income with good social connections and often with a challenging career.”

More than half of those queried were university graduates. It was hard to find the so-called underprivileged, the researchers said.

This is quite different than the protest scene of the 1970s, which was dominated by social science professions. The institute theorized that since many of today’s protests deal with energy, city planning and construction projects, people with technical professions, like engineers, are more likely to protest.

They can show up not only as objective experts, but through their training can produce confident and precise alternatives to what is trying to be pushed through, the report said.