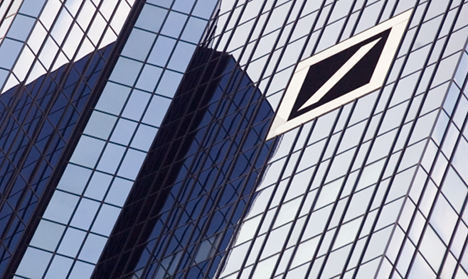 Around €2.167 billion in losses in the period from October to December were announced by the bank, compared with a profit of €147 million one year earlier.

At a pre-tax level earnings were also deeply in the red – around €2.569 billion in the October-December period compared with a year-earlier loss of €351 million.

The bottom-line loss was attributable to write-downs of €1.9 billion and litigation-related charges of €1.0 billion, the statement explained.

Deutsche Bank is currently being investigated over allegations that some of its employees were involved in rigging the Libor and Euribor interest rates.

And one of its co-chief executives, Jürgen Fitschen, is among a number of top-ranking managers under suspicion of being privy to a scheme to avoid paying sales tax in the trading of carbon emissions certificates.

The fourth-quarter loss also dragged down Deutsche Bank’s bottom line for the whole of 2012, when net profit declined to €611 million from €4.132 billion the year before, the bank said.

Nevertheless, Deutsche Bank said it would pay shareholders an unchanged dividend of €0.75 per share.

In September, the group unveiled deep cost-cutting plans which included a decisive shake-out of risky assets.

While several of the measures “had an expected material impact on our fourth quarter financial results, we are encouraged by the initial results,” insisted Fitschen and his co-CEO Anshu Jain.

For example, Deutsche Bank’s key Core Tier One capital ratio – a measure of a bank’s ability to withstand unforeseen risks – rose to 8.0 percent, from less than 6.0 percent a year earlier and “significantly above our communicated target of 7.2 percent for year-end 2012.

“This development predominantly reflects strong delivery on portfolio optimisation and de-risking of non-core activities, as well as model and process enhancements,” the two CEOs said.