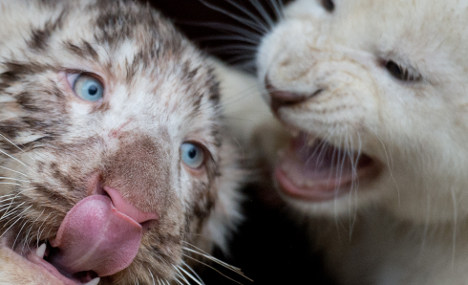 “They were planning to vaccinate, worm and weigh them all, but they couldn’t weigh the tigers in the end – they wouldn’t stay still,” Juliane Gunkel from the Hodenhagen Serengeti Park near Hannover, told The Local on Wednesday.

The tigers were about a month older than the lions and thus that much larger and more wriggly, she said.

Check out the wriggly lions and tigers here.

“There was quite a lot of fuss, they didn’t like being handled, but the vet had to take a look at them – this was the first time they had been removed from their mothers since being born. The wriggling and fuss were great indicators though, it was all natural behaviour.”

White tiger Bianca had her four babies in October. The three males have been named Snowy, Ice and Mohan, while the female bears the name Shiva.

White Lion Loona had her four babies at the end of November – two males called Lio and Thabo, and two females called Kim and Eva.

White tigers and lions are not albinos Gunkel said – they get their colouring from recessive genes much as red-haired people do.