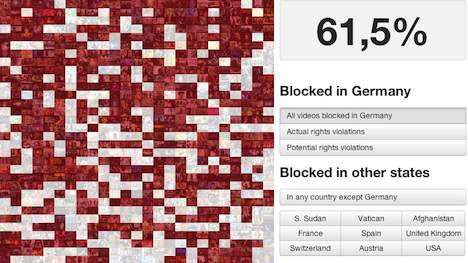 It’s common occurrence for internet users in Germany. A friend sends around a link to a cool band or the new David Bowie song, but clicking through to the popular video platform YouTube ends the journey with the frustrating notice: “This video is not available in Germany because it possibly contains music for which GEMA hasn’t approved the rights.”

And now an app developed by the Berlin-based data journalism outfit OpenDataCity shows the extent of the digital embargo. Germany cannot see 61.5 percent of YouTube’s top 1,000 videos – far more than the 15 percent blocked in South Sudan and the five percent that is taboo in the Vatican.

Top 1000 YouTube Videos
Supported by MyVideo. Made by OpenDataCity. This App is under CC-BY 3.0.

The reason for the web blackout is YouTube’s row with GEMA, which is demanding €0.00375 each time a video is played. YouTube, on the other hand, is offering a share of its ad revenue, seeing itself as a platform rather than music provider.

Though GEMA has made itself very unpopular in Germany for its much-criticized approach to collecting royalties in the internet era, most of the videos are blocked pre-emptively by YouTube.

GEMA is now suing YouTube for making it seem like it is condemning German web users to the digital dark ages.