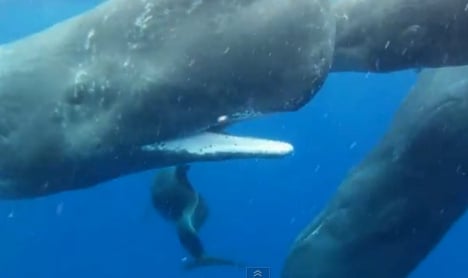 Alex Wilson and Jens Krause from the Leibniz Institute of Freshwater Ecology and Inland Fisheries in Berlin found the group off the Azores islands in the northern Atlantic.

The dolphin, an adult bottlenose with a deformed spine which gave it a twisted physique, was displaying trusting, intimate behaviour with the sperm whales and their calves, the researchers said.

“These animals tolerated the dolphin. This is amazing, as sperm whales have until now never been observed indulging in friendly interaction with other species,” said Wilson in a press release.

Yet why the sperm whales accepted the outsider into their group remained a mystery.

“One should not go so far as to speak of sympathy – we think the whales may simply enjoy the attention of the dolphin,” suggested Wilson.

Photographs and details of the observation will soon be published in the journal Aquatic Mammals.