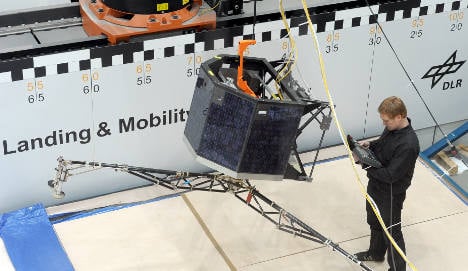 “The mission is extremely important,” said Andrea Accomazzo, leader of the European space agency Esa which is organizing the mission to explore the comet’s surface. “If we can gain a better understanding of comets, then we will know about the formation of our solar system. That is like archaeology in space.”

The German Aerospace Centre in Bremen (DLR) – which boasts research faculties unique in Europe – is charged with the important role of preparing ‘Philae’, the landing unit of the probe, for its big moment.

The spacecraft was launched in March 2004, so is already well on its way towards its final destination: comet 67P/Churyumov-Gerasimenko.

But it went up untested – because the expertise for doing so was not available then. The Bremen researchers are now working with a replica of the lander to prepare for its encounter with the comet.

Uncertainty about landing conditions means that researchers must be prepared for everything. “We know almost nothing about the comet,” admitted Accomazzo.

To ensure a smooth operation, experts are currently putting their copy through its paces by simulating every conceivable scenario. The Bremen team are practising for landings on a wide variety of surfaces, from firm to sandy, smooth to bumpy.

Should the probe reach the comet in May 2014 as forecast, a camera will photograph it thoroughly in order to find a suitable landing place. The Bremen tests should help the mission to plan the landing precisely and to adjust the software of the unit if necessary.

Some alterations have already been made thanks to the observations of the Bremen team. A brace has retrospectively been added to the legs of the landing unit in an attempt to protect its delicate measuring technology from the full impact of the landing.

But whatever the outcome of the mission, the ultimate fate of ‘Philae’ is already set: as the comet moves ever closer to the sun, the lander is heading for a fiery finish.