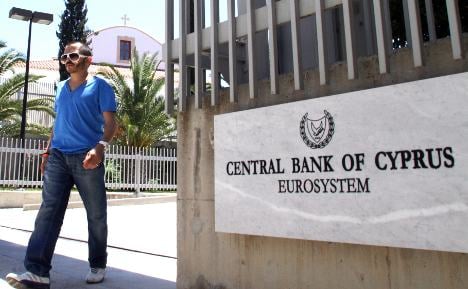 German politicians have criticized plans to bail out Cyprus, saying its banks are havens for tax evaders and money launderers.

Cyprus’s request for EU financial aid for its debt-ridden economy has been undermined by damaging allegations it is a laundromat for dirty Russian money as international lenders call for greater transparency.

“The issue is a political one because of the German elections,” a government source told news agency AFP on condition of anonymity.

Cyprus sought out aid last June. But suspicions over banking sector transparency and Nicosia’s reluctance to push through tougher reforms such as privatization have delayed the urgently needed bailout, leaving the country on the brink of bankruptcy.

“We are making sure we comply with all recommendations of the International Monetary Fund and the Eurogroup to ensure these allegations go away,” said the

“Another reason is that countries would like to have a piece of our pie as a financial centre,” the source added.

Former finance minister Michalis Sarris said the money laundering issue keeps resurfacing because it is a “sexy topic” that sells in the German media and the election campaign in that country.

“Cyprus has to be above suspicion and do more than is necessary to demonstrate it is a reputable financial centre,” Sarris told AFP.

He said under a draft bailout agreement, international lenders called for more transparency and a timely exchange of data when other countries request tax information.

“The government should ask for specifics and take the necessary measures required.”

Nicosia is now on the counter-offensive on the issue of financial crime.

“It is obvious that behind the attacks against Cyprus there are vested interests. Those who attack Cyprus want to take its role as a serious, international, financial and investment centre,” government spokesman Stefanos Stefanou told reporters on Thursday.

He said Cyprus was the fourth largest investor in Russia and the second biggest in Ukraine.

Fed up with negative reports alleging Cyprus to be a haven for the ill-gotten gains of Russian oligarchs, the Cypriot parliament is launching a campaign to defend the island’s “clean” reputation on the European stage. And the government says it welcomes closer scrutiny of its financial sector.

“We are doing everything within our power for the implementation of all international recommendations. We disagree with allegations that there is non-implementation of laws and regulations,” said central bank official Michalis Stylianou.

at a meeting in Brussels on Monday because negotiations on bank recapitalization are continuing. They said a decision would most probably be taken in March.

Cyprus says it has adopted more international standards and recommendations than many of its fellow eurozone colleagues.

A Deutsche Bank report on the Cyprus debt crisis issued last week said there was an “excessive focus” on money laundering.

“It is rather Cyprus’s status as an offshore tax haven with a relatively opaque banking sector heavily used by foreign depositors that is under scrutiny,” said the report, referring to non-resident deposits of €24 billion, or $32 billion, much of it from Russia.

Nicosia called for a bailout in June when its banks, hit by the EU-imposed writedown on Greek debt, needed financial assistance.

In a draft agreement with the EU and IMF, the amount for the banks was set at up to €10 billion as part of a total package which could reach €17.5 billion – matching the output of the island’s entire economy.

Although Cyprus has pushed through harsh austerity measures of around €1.2 billion in tax hikes and savings, fellow EU partners have called for more reforms.