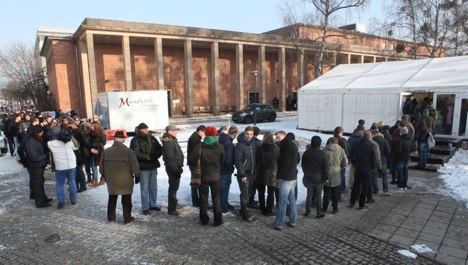 The 51-year-old Oscar winner, who is directing and starring in the film, will begin shooting at the Babelsberg studios in Potsdam at the beginning of March. The famous studio is co-producing the film.

The casting agency Filmgesichter (“Film Faces”) called for men to come and apply for a mini-role as a soldier in a crowd scene in the film. “We need between 5,000 and 8,000 extras,” studio spokeswoman Eike Wolf said.

Though fewer people showed up than required, Wolf said this weekend’s casting would be enough for the shoot. The agency cast extras in 2008 for Quentin Tarantino’s World War II movie Inglourious Basterds, also filmed in Babelsberg.

The Monuments Men, which will mainly be shot in and around Berlin and Brandenburg, is set towards the end of World War II, and tells the story of a group art historians and museum curators who race to save stolen art treasures before Adolf Hitler’s army can destroy them.

As well as Clooney, the film is also set to feature Hollywood stars Matt Damon, Cate Blanchett, and Daniel Craig.