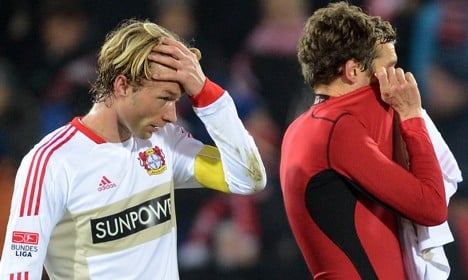 Leverkusen’s draw means league leaders Bayern Munich, who are at VfB Stuttgart on Sunday, can extend their lead to 11 points if they earn their 15th win in 19 league games this season.

Unbeaten in their previous five games, Freiburg, eighth in the league, outplayed Leverkusen on occasion, backed up by the stats as they finished with more possession, shots on goal and corners, but failed to break the deadlock.

Germany striker Stefan Kießling, the league’s top scorer with 13 goals, and midfielder Andre Schürrle both went close, while at the other end Freiburg’s Karim Guede had a chance in the dying stages after coming off the bench.

“We wanted all three points, but we knew it would be difficult. The draw is fair,” admitted Schürrle, with Germany coach Joachim Löw watching the match.

Freiburg were missing key players in defenders Mensur Mujdza (back) and Immanuel Höhn (infection), plus midfielder Cedrick Makiadi (at the African Cup of Nations with Congo) and forward Sebastian Freis (shoulder injury).

Leverkusen host Dortmund, who beat Nuremberg 3-0 on Friday, next Sunday in a mouth-watering clash, Schürrle adding: “We’re looking forward to Dortmund, that will be a great game.”

Earlier, fourth-placed Eintracht Frankfurt stayed in the chasing pack with a 2-1 home win over Hoffenheim.

A deft chip from Japan winger Takashi Inui on 35 minutes allowed Frankfurt midfielder Martin Lanig to ghost in behind the centre-backs and beat Hoffenheim’s Germany goalkeeper Tim Wiese for the first goal.

Hoffenheim, whose centre-back Marvin Compper quit the club for Fiorentina on Friday after being accused of having a motivation problem, equalised through teenage striker Kevin Volland on 65 minutes.

Eintracht regained the lead just two minutes later through right-winger Stefan Aigner, but despite the three points, Frankfurt, who were promoted at the end of last season, remain 12 points behind Bayern.

The defeat drops Hoffenheim into the automatic relegation places, in second bottom spot.

With speculation rife over whether Germany midfielder Lewis Holtby will join Tottenham Hotspur before January’s transfer window closes, his Schalke 04 side were held to a goalless draw at relegation-candidates Augsburg.

Holtby, whose contract ends in June, will join Spurs for next season and, although the North London club want to sign him sooner, Schalke have rejected all their offers for the 22-year-old so far.

Schalke have won just once in eight games and drop to sixth, while the hosts moved up to 16th.

Mainz moved up to fifth with a workmanlike 3-0 win at bottom side Greuther Fürth as former Real Madrid striker Adam Szalai scored twice.

Despite having defender Sebastien Pocognoli sent off for a dangerous foul just 34 minutes into his Bundesliga debut after joining from Standard Liege last week, 10-man Hannover 96 claimed a 2-1 victory over Wolfsburg.

There was bad news for Hannover after the game as it was confirmed Swiss centre-back Mario Eggimann faces a long lay off after breaking his ankle.