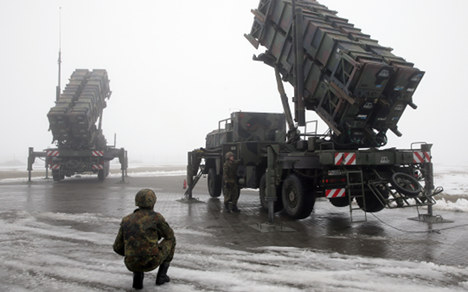 After some 40 people surrounded the soldiers in the southern town of Iskenderun, one German reportedly had a bag containing white powder thrown over his head. Four other soldiers managed remained unscathed and all five made it back to their army quarters after Turkish security forces arrived. All of the Germans were in civilian clothing at the time of the incident.

While the authorities stepped in quickly enough to prevent things from escalating further, similar attacks have happened in the past on foreign soldiers on Turkish soil.

Thought to be from the Turkey Youth Union (TGB), a nationalist youth organisation, members have been known to throw bags over NATO soldiers in the past in reference to the treatment of Turkish soldiers captured by US forces during the 2003 Iraq war.

The German soldiers manning Patriot missiles on the border are part of a NATO mission requested at the end of 2012 by the Turkish government to help protect against attack during growing unrest in Syria.

There are around 350 German soldiers working on the “Active Fence Turkey” project, which started properly in the country at the beginning of this year.