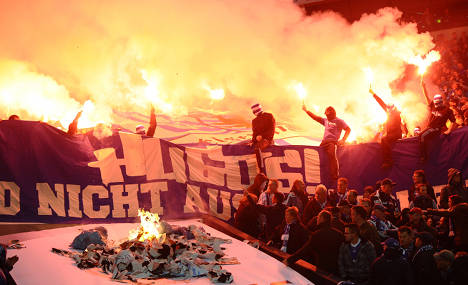 On Saturday, hooligans in the Eintracht Frankfurt fan block forced their team’s 3-1 defeat at Bayer Leverkusen to be delayed by six minutes after lighting flares and setting off fireworks.

Referee Wolfgang Stark marched both teams off the pitch amidst safety concerns for the players after the pyrotechnics started landing on a corner of the pitch.

“It is absolutely unacceptable when a game needs to be interrupted like that,” said Löw, who was in the stadium.

“When missiles are thrown thereby endangering other spectators, it’s extremely important to take action against these people with all the power available.”

A contentious point of the new regulations involves the clubs’ right to demand full body searches for any fans suspected of carrying pyrotechnics.

“We thought we had a result we could live with,” said Klopp referring to the regulations, which were modified after fans’ protests last year.

“It’s bad when you see images like this. There is nothing more detrimental to a discussion than if you see pictures like those.”

The German Football Federation (DFB) are expected to impose a six-figure fine and insist Frankfurt play a game behind closed doors, as this is not the first time Eintracht have appeared before the DFB’s disciplinary committee.

According to German magazine Kicker, the Hessen club has already paid €473,000 in DFB fines for their fans’ behaviour since 2002.

Leverkusen chairman Wolfgang Holzhäuser has said he wants to pass any fines his club may face, for their part as hosts, onto the fans responsible and wants to increase the price of tickets for away fans.

“The rockets flew directly onto the pitch, near to players. It didn’t look so dramatic, but if it hit one of the players that is an attempt at grievous bodily harm,” said Holzhäuser. “Imagine if something like that happened in the middle of Frankfurt? “Why should it suddenly be possible in a stadium?

“The stadium isn’t a place just open to the public,” said, adding that “nobody, especially the fans who light those fireworks, are above the law.”

Eintracht can escape heavy punishment if they help identify those responsible for Saturday’s pyrotechnics.

“Only if the culprits are tracked down and pointed out to the disciplinary committee can clubs escape heavy punishments on a regular basis,” said DFB vice-president Rainer Koch. “Eintracht are on board with that.”

But Holzhäuser said punishing clubs for the actions of individual fans is not the answer.

“The dynamic of punishing clubs by reducing the number of away tickets, games behind closed doors or reducing points, in extreme cases, punishes the wrong people,” he said. “But at the moment, there are few alternatives.”