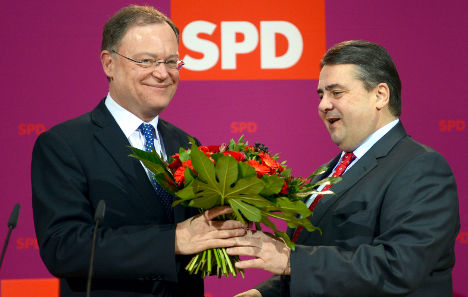 Sunday’s win in Lower Saxony, which should result in a Social Democrat-Green state government, will give the opposition a majority over the government in the Bundesrat, giving them the power to change legislation.

“Since Lower Saxony we now have a constructive majority in the Bundesrat,” SPD chief party whip Frank-Walter Steinmeier told the Frankfurter Allgemeine Zeitung newspaper on Tuesday.

The party would use their absolute majority together with the Greens to introduce legislation through the Bundesrat ahead of September’s national election, added Steinmeier.

The main opposition’s chief priorities are: establishing a comprehensive minimum wage, ramping up the fight against tax evaders and altering the controversial Betreuungsgeld subsidy, which has already been passed by the Chamber of States.

The subsidy, which has come under heavy fire from members of all parties, would give every family that does not send its children to a kindergarten €150 per child per month. It is feared the money will effectively stop poorer families including many immigrants, from sending their children to child care, trapping the kids and mothers at home.

Following their win in Lower Saxony, the SPD – in various regional coalitions with Greens and Left party – now controls 36 of 69 votes in the Bundesrat where the federal states are represented. This allows the party to pass initiatives if they wish to.

State governments can suggest legislation in the Bundesrat. If passed, the laws are sent to the Bundestag lower house for approval, in a reversal of the normal procedure.

However, Chancellor Angela Merkel’s ruling Christian Democratic Union coalition with the Free Democrats presides over a majority in the Bundestag lower house and could block the SPD’s initiatives once they arrive there.

This means the upper-house-to-lower-house-path is more likely to be a way for the SPD to raise the profile of their policies in the run-up to the election rather than to implement real changes to the law, the Frankfurter Allgemeine Zeitung said.

But on the other hand, the SPD/Green-controlled upper house can now also choose to block government initiatives in the next vital few months before voters go to the polls.

Merkel’s cabinet will now have to look to form majorities in the upper house to pass their own initiatives – including moving forward with the energy transition and further measures to regulate financial markets.