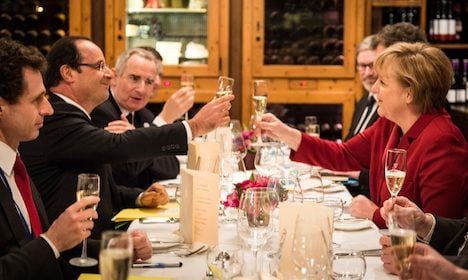 French President Francois Hollande has travelled to the snowy German capital to join Chancellor Angela Merkel to fete the Elysee Treaty, inked in 1963, which heralded a new era of friendship between the former foes.

Eighteen years after the end of World War II, then French president Charles de Gaulle and West German chancellor Konrad Adenauer formalised on January 22 the cooperation that has since been a building block of European unity.

But the half-century milestone comes amid strains in the Franco-German partnership and as the European Union faces testing times over the eurozone debt crisis and euroscepticism in Britain.

France and Germany’s foreign ministers jointly insisted in a German newspaper that Europe was “not the problem, but it must be the solution” and urged a modernisation of the “European reflex” of former generations.

“We want to counter the danger of an erosion within the EU,” Laurent Fabius and Guido Westerwelle wrote in the Frankfurter Allgemeine Zeitung daily.

“The drift towards populism and nationalism has grown alarmingly in the course of the European debt crisis. We are making a stand with a German-French commitment to Europe,” they added.

Kicking off events, Merkel joined Hollande at the French embassy for a meeting with figures from both countries’ cultural scenes. Their ministers agreed a programme of culture and media projects.

“I am a child of this friendship (between France and Germany)… my first car was a 2CV and I studied in Paris,” German film director Wim Wenders said on arrival, referring to an old Citroen model.

“There’s a certain indifference (today) but that doesn’t surprise me after 50 years of marriage,” he added.

“The Artist” director Michel Hazanavicius was among French representatives.

With the French, German and European flags fluttering, Hollande was received with military honours by German President Joachim Gauck at the Bellevue palace where he also briefly shook hands with warmly wrapped-up onlookers.

He then went on to the chancellery to be greeted by Merkel before a group photo with ministers.

Later a joint session of both countries’ cabinets was held, while nearly 400 French lawmakers were to join their Bundestag counterparts for a debate in the Reichstag.

“We have differences and different political majorities, but without Franco-German friendship, (we) would lack an engine for European construction,” French National Assembly President Claude Bartolone told reporters.

Shortly after Hollande arrived in Berlin, he and Merkel sought to present a unified front during a debate with about 200 German and French youth, despite tensions from the euro crisis which has propelled Berlin into Europe’s driving seat.

The two leaders have differed on the best approach for stemming the eurozone turbulence — with Hollande pushing for fresh spending to bolster growth versus Merkel’s pro-austerity mantra.

Even if the two have pulled off compromises, Germany, which has fared far better in the crisis than many of its partners, has expressed hopes the French economy will return to robust growth.

Hollande acknowledged during the debate that his country had a “problem of competitiveness”, saying Germany — Europe’s effective paymaster — had “made efforts” while France “has lost time”.

On military matters too, Paris and Berlin have limited cooperation, as the current crisis in Mali and Germany’s non-intervention in Libya in 2011, have shown, but Merkel played down their different approaches.

“Step by step we will always weigh up, can we do that, or can’t we…,” she said, insisting that Germany would not leave its partner, whose troops are fighting Islamist militants in the West African state, high and dry.