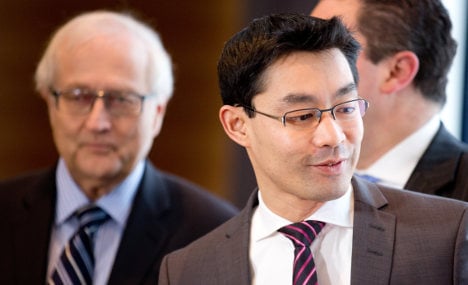 Rösler, who turns 40 next month, is Economy Minister and Merkel’s vice chancellor. He had been expected to resign as leader of the Free Democrats (FDP) on Monday if the party failed to get at least the five percent parliamentary representation hurdle in Lower Saxony.

But his fortunes – and that of his party, which remains Merkel’s coalition partner of choice come the September general election – seemed to brighten on Sunday with a result of 9.9 percent, way above what had been predicted in opinion polls.

Yet it almost immediately emerged that a chunk of this support had come from Merkel’s conservative Christian Democratic Union (CDU). Rösler was then urged by many observers to use this chance to step down gracefully from heading the party and leave his successor something to work with.

Rösler, who is himself from Lower Saxony, took on his greatest rival within the FDP, Rainer Brüderle, the 67-year-old parliamentary party leader.

Rösler surprised Brüderle on Monday morning by telling a meeting of the party’s leadership he was ready to give up the top spot – not only in the FDP federal election campaign but also within the party itself. This move appeared to force Brüderle to deny he wanted the job.

He had attacked Rösler on Friday, just two days before the Lower Saxony election, and proposed an early party summit – a demand widely interpreted as a declaration of war.

All further attempts within the party to smooth things out between the two men had failed, leading to Rösler’s public challenge – and Brüderle’s refusal to take it up.

“I am ready to step aside if Rainer Brüderle also wants to be federal chairman [of the party],” Rösler is reported to have told the party’s leadership.

But Brüderle said he did not want the top job and will now lead the general election campaign instead.

“Brüderle funked it,” one member of the FDP leadership said, suggesting Rösler came out of the contretemps stronger than before.