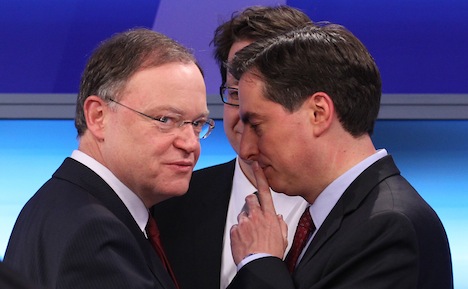 Preliminary results from Lower Saxony on public television showed Merkel’s conservative Christian Democrats (CDU) ahead with around 36 percent and their coalition partners, the pro-business Free Democrats (FDP), with about 10 percent.

The centre-left Social Democrats had about 32 percent and their favoured allies the Greens nearly 14 percent, leaving the two sides neck and neck with 46 percent.

The cliffhanger was due to develop throughout the night as results trickle in, determining which coalition will come out on top eight months before a national election that will decide if Merkel wins a third four-year term.

The Christian Democrats were down from their 42.5 percent score at the last election in 2008 but appeared to capitalise on the popularity of state premier David McAllister, a half-Scot seen as a potential Merkel successor.

“What a heart-stopping night,” McAllister told reporters. “We have every reason to hope that we will be able to continue our successful coalition in Hannover,” the state capital.

The big winners of the night, however, were the pro-business Free Democrats (FDP), who looked set to tally their best result in Lower Saxony in post-war history.

Polls had indicated they risked slipping below the five-percent hurdle required for seats in the state parliament, but they seemed to get a lift from conservative voters splitting their ballots under Germany’s two-vote system in a bid to rescue the coalition.

ARD television said around 101,000 voters who cast ballots for the conservatives in 2008 had plumped for the FDP this time.

If the FDP failed to win seats, its embattled leader Philipp Rösler, who is also Merkel’s vice chancellor and who hails from Lower Saxony, was seen as likely to step down — possibly as soon as Sunday night. The outcome seemed to give him a reprieve, if perhaps only brief.

Around 6.2 million people were called to the polls in Lower Saxony, home to European auto giant Volkswagen.

If the centre-right coalition holds on to power, analysts say it will give Merkel, who already enjoys a robust lead in national polls due to her fierce defence of German interests in the eurozone crisis, a strong boost heading into the September election.

But if the Social Democrats (SPD) and Greens manage to eke out a victory — still a distinct possibility — pundits say it could help shore up the battered campaign of Merkel’s gaffe-prone challenger Peer Steinbrück.

Steinbrück, a former finance minister from Merkel’s 2005-09 “grand coalition” government, was anointed by the SPD as its chancellor candidate late last year.

But he has run into trouble of late with revelations that he made around €1.25 million ($1.66 million) over the last three years in speaking fees, and with comments that Merkel owed much of her popularity to her gender.

The SPD’s candidate in Lower Saxony, Stephan Weil, hinted that he had been forced to campaign in the face of headwinds out of Berlin.

“The SPD made gains, which is remarkable considering the not exactly easy conditions under which we fought for voters’ support in recent weeks,” he said.

The website of news weekly Der Spiegel said the stakes remained high for the opposition.

“A victory in Hannover would be a great relief for the Social Democrats,” it wrote. “It would let the party dream of a turnaround at the national level. If it doesn’t make it, there’s the threat of resignation in the SPD about its chances this autumn.”

After Lower Saxony, only the southern state of Bavaria is expected to vote before the September general election.