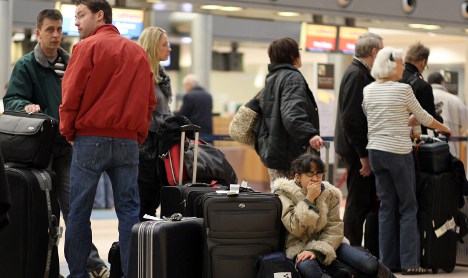 Only one of 20 security checkpoints are open, union and airport officials said.

No flights have yet been canceled, the airport said, but passengers should expect extremely long delays – both leaving and entering the airport. The Verdi union, which called for the work stoppage, said about 95 percent of early shift security personnel had walked off the job.

“Passengers can land in Hamburg but they cannot leave the plane, said Michael Eggenschwiler, chairman of the airport’s executive board. The strike is affecting passengers, the airport and the airlines, he said, adding that the airport alone is expecting a mid-six figure loss from today’s action.

“Just about nothing is moving,” an airport spokeswoman said. There are long lines leading up to the terminals and many passengers have missed their planes and are angry about the situation, she said.

Some 19,000 passengers on 176 flights could be affected, as only 50 to 80 passengers per hour can pass through security, due to the work stoppage, the airport said.

Verdi called for the strike in an effort to push through its demand for a €14.50 hourly wage for security personnel, who currently earn €11.80 per hour. The union had asked the employers’ organisation to put an offer on the table by last week, but a union official said that didn’t happen, hence the strike.

Airport officials said passengers should get in touch with their airline’s hotline and can get additional information online.