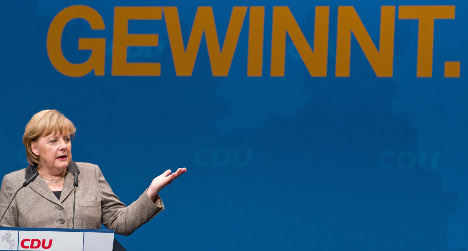 Lower Saxony, a region of 6.2 million voters that is governed by the same centre-right alliance with which Merkel governs in Berlin, will elect a new parliament and analysts say the race has narrowed to a dead heat.

Boosting the stakes further is the fact that state premier David McAllister, a charismatic half-Scottish conservative, is widely seen as a potential successor to Merkel.

“We want to continue our success story,” McAllister, 42, told a cheering crowd in the town of Verden at the weekend in a campaign that has seen Merkel make frequent appearances on the conservative Christian Democrats’ (CDU) behalf. He has predicted a “heart-stopping finale” due to the tightness of the race.

Lower Saxony is home to Europe’s top automaker Volkswagen and its capital is Hannover, the former seat of a German royal dynasty.

Its mayor, Stephan Weil, 54, is McAllister’s chief challenger but the centre-left Social Democrat (SPD) trails far behind the state premier, the genial son of a British military officer and a German teacher, in the popularity stakes.

The state has below-average unemployment, relatively robust economic growth and has markedly improved its public finances in recent years. However, McAllister’s Achilles’ heel is his coalition partner, the pro-business Free Democrats (FDP), whose weakness could also create headaches for Merkel at the general election in eight months’ time.

The FDP is currently tottering on the five-percent line required for representation and a failure to clear the mark Sunday could have wide-reaching consequences.

The party is fighting for its survival just as sniping at its luckless party leader, Economy Minister Philipp Roesler, who was born in Vietnam but grew up with his adoptive German parents in Lower Saxony, is reaching fever pitch.

“The key question is not whether the FDP stays in government but whether it manages to get seats in the state parliament,” political scientist Stephan Klecha of the University of Göttingen said.

Oskar Niedermayer of Berlin’s Free University agreed: “If it doesn’t make it in, Mr Roesler will step down that night. And if it only barely makes it, I would recommend he do the same.”

Rösler has called on McAllister supporters to take advantage of Germany’s complex dual-ballot system and give the FDP one of their votes in a bid to keep the current team in power.

But Merkel and McAllister, both of whom are far more popular than their respective coalitions, have shown little enthusiasm for the notion of shedding CDU votes to shore up the decade-old centre-right alliance.

“A loss of power in Hanover could feed doubts about Merkel’s ability to transform her popularity into election results,” influential weekly Die Zeit wrote recently, summing up the stakes for the 58-year-old chancellor.

Polls give an SPD-led coalition with the high-flying Greens a slight edge in Lower Saxony, in what both parties hope will be an auspicious sign for the September poll and give a lift to Merkel’s gaffe-prone SPD challenger Peer Steinbrück.

“They could carry that as a key argument into the campaign and that would take some of the pressure off Steinbrück,” Niedermayer said.

The Social Democrats in Lower Saxony are clearly getting little help from the national level, where Merkel’s CDU Wednesday opened up a 20-point spread against them in a poll.

“Steinbrück finds himself in free fall, but things could get even worse for him if McAllister manages to stay in power,” conservative daily Die Welt wrote. “This will provoke more than a mere storm in a teacup within the SPD.”

After Lower Saxony, there is only one remaining state poll this year, in September in Bavaria, where the ruling conservatives risk heavy losses.