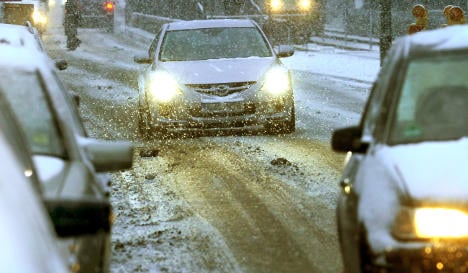 A 21-year-old woman was killed early on Wednesday morning when her car hit black ice, left the road and hit a tree on a main road in Hankensbüttel in Lower Saxony, said police. Another 21-year-old man was killed nearby on Tuesday when his car skidded into a snow plough in Marienberg near the Czech border.

In the west, the A4 and A3 motorways were completely closed on Wednesday after lorries skidded on ice or got stuck in snow. The whole of North Rhine Westphalia seemed clogged with traffic jams in the morning, WDR Online said. At one point traffic jams stretched a total of 400 kilometres across all roads in the state.

Police estimated more than 100 accidents occurred on roads in Baden-Württemberg on Wednesday morning – after heavy snowfall overnight – while there were two dozen accidents in north Hesse and 18 in western Palatinate over the same period. Most of these resulted in only slight injuries and superficial vehicle damage.

In more serious incidents a 46-year-old and his passenger were badly injured near Wiesbaden when their car skidded across the carriageway into oncoming traffic.

And elsewhere in western Palatinate an 18-year-old driver was badly hurt when his car slid off the road onto a railway line and hit a tree. Luckily the approaching train was able to brake in time to avoid hitting the car.

Generally, trains withstood the icy weather much better than cars, but with more ice and snow on the way, the railways may not be out of the woods yet.

“We haven’t got through it yet,” Grube told the regional Neue Osnabrücker Zeitung newspaper. If the whole country is covered in snow and ice for days on end – as looks the case for the next week – travellers should expect “some cancellations,” said Grube, due to Deutsche Bahn’s shortage of reserve trains.

Winter’s comeback is showing no sign of letting up, said the DWD weather service, with the current low-pressure system sticking around to keep the whole country at subzero temperatures at least until the weekend.

More heavy snowfall is expected for the centre, east and south-east of Germany over the next few days, with especially heavy falls in the mountains. Meanwhile, in the north and north-west of the country the snow will ease off, said DWD, but clear skies will cause temperatures to drop to as low as minus 15 at night.