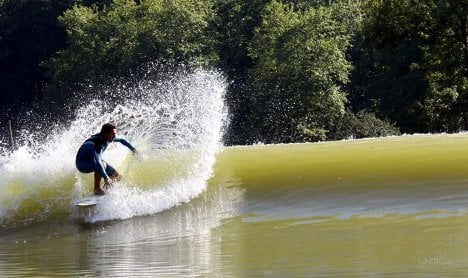 Using a new “Wavegarden” system developed in Spain’s Basque country, the pool would even produce tubes — those coveted waves that completely encase a surfer.

“This technology will revolutionize surfing,” Wiener told the paper. “It will finally be possible to do it away from the coast.”

The two men have proposed putting the wave pool in the middle of the Tempelhof’s former airfield, which has been turned into a massive urban park. The pool would stretch the length of two football fields and width of one pitch, enabling rides over 100 metres. With the project’s cost estimated at €4 million, surfers would be charged between €10 and €20 for an hour of waves.

“There’s a big surfer scene here, maybe the biggest in Germany,” Wiener said, dismissing concerns Berlin might be too cold to go surfing during much of the year. “It’s just as cold in Ireland right now and the water is full because winter storms make the best waves.”

The Berliner Zeitung reported that Tempelhof’s developers thought the wave pool could be a “good use,” but there were space considerations, since parts of the huge park will be turned into housing. City officials believe an alternative location could be near Berlin’s Olympic Stadium.

Bringing waves to the German capital would also help the city draw even with Bavarian rival Munich, which offers urban surfers small waves in tributaries of the Isar River.

“With waves Berlin would be perfect,” Nadol told the paper.