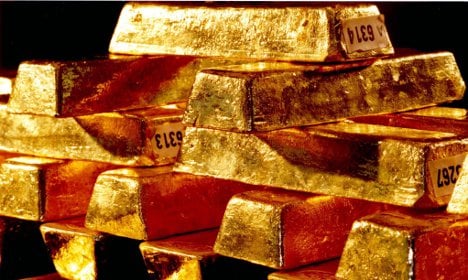 The paper said it obtained a copy of the German central bank’s plans, which follows criticism of the bank’s gold holdings abroad. The foreign holdings were a relic of the Cold War, the paper said, as the gold was sent abroad for safe keeping when Germany was divided into eastern and western countries.

After a review of the Bundesbank’s annual financial statements, the Bundesrechnungshof or Federal Audit Court recommended that the bank come up with a plan on how to store the gold.

Nearly 3,400 tons or 45 percent of the Bundesbank’s reserves are held at the New York Fed, while the Bank of France has 11 percent and the German central bank’s headquarters in Frankfurt houses 31 percent. The Bank of England holds 13 percent.

Last autumn Bundesbank board member Carl-Ludwig Thiele said there were no longer compelling reasons for keeping the gold in Paris. Cold War security considerations no longer applied, he said, and there were other arguments against keeping German reserves in Paris.

In the face of a world currency crisis, the German central bank would be able to obtain currency from the New York and British banks, but not from the French one, as France is a euro member country.

The Bundesbank is expected to make details of its plan public on Wednesday.