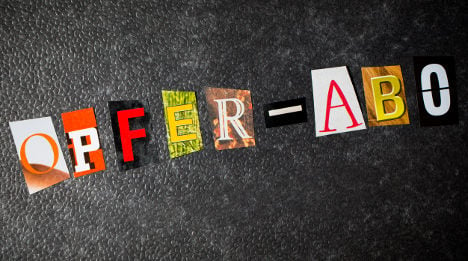 Jörg Kachelmann, a famous weather presenter on German television claimed in several interviews last autumn that women in Germany had the tendency to repeated make false claims of crimes such as rape, to further their interests.

The organizers of the Unwort des Jahres (un-word of the year) selected Opfer-Abo as it “unacceptably puts women under general suspicion of inventing sexual violence and of thus being perpetrators themselves.”

The jury said this was factually grossly inaccurate – in the face of the dramatic statistics which show that only between five and eight percent of women who have experienced sexual violence actually report it to the police and that just three to four percent of cases which are officially reported lead to a court case.

Expressions like this threaten to warp further the way in which society deals with sexual violence, the jury said.

Kachelmann was accused of rape by his former lover – and in a case which was watched by the nation, was eventually acquitted.

The word Opfer-Abo was joined by Pleite-Griechen (broke Greeks) in the worst top three new German words of the year. This was a phrase frequently used during 2012 by tabloid newspapers such as Bild, the jury said. It defamed an entire nation, including those Greeks living in Germany, in an unfair and unqualified fashion, they said.

The final word in the top three was Lebensleistungsrente (life achievement pension), which the jury described as a confusing or even cynical description for the plan to introduce a very limited state-funded addition to general pension payments.

This complex word exploits the content of “life achievement” in order to sell a minimally useful measure against old-age poverty, the jury said.

Previous words named the worst of the year include “kebab-murders,” a phrase used by police and many Germany media to describe the murders of eight ethnic Turkish and one Greek which turned out to be the work of a gang of terrorist neo-Nazis.