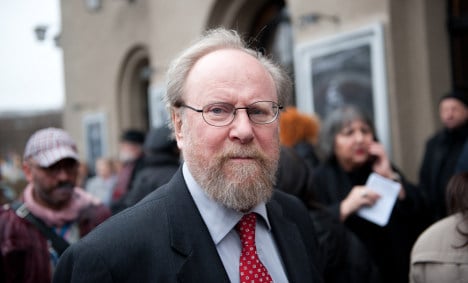 “I’ve been called a snob, a racist, a Nazi [and] an arsehole,” wrote Thierse in a guest article in the Berliner Morgenpost on Sunday – the same paper which published his now notorious comments on New Year’s Eve complaining about Swabians failing to adapt to Berlin’s culture.

Thierse said he was fed up with being at the centre of what he called a “staged” outrage, being demonized for offhand comments taken out of context and exaggerated in skewed newspaper reports.

All he had done, was “mention two little observations about everyday misunderstandings between locals and newcomers,” when his interviewer had asked him about his constituency in the gentrified East Berlin district of Prenzlauer Berg.

Some 90 percent of his neighbours arrived in Prenzlauer Berg after 1990. It’s gotten so bad, he told the journalist, that as one of the last indigenous species in the neighbourhood he should be declared an endangered species.

He had also happened to mention that in the bakery he would like to continue to order Schrippe – the Berlin slang for a bread roll – and not a Weckle, the word used by Swabians.

But the Social Democrat politician and long-time Berlin resident had never dreamed these “flippant” comments would prompt such a “torrent of indignation.” “Oh no!” wrote Thierse sarcastically. “How narrow-minded of me to play the role of the defender of Berlin dialect!”

The reaction has been particularly harsh in Swabia he said, where newspapers “are filled with rage and scorn” about him, he said.

“I would never have expected such a lack of humour,” wrote Thierse, who was surprised and offended by comments in the press asking why he had not taken Turkish immigrants to task, or suggesting that people as scruffy-looking as him should “kindly keep their mouths shut!”

Given how he had been misunderstood, wrote Thierse, he felt he should reaffirm he has nothing against the Swabians – has Swabian colleagues and friends, has visited Swabia on holiday and even eats Swabian food in the Bundestag canteen.

Although he remained a Berliner through and through, Thierse hoped “that Berlin’s language and style will also become home for the many newcomers, also those from Swabia.”

“You’re all welcome!” he added.