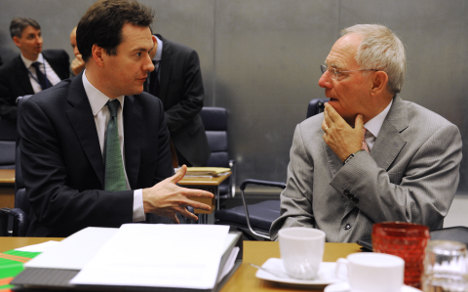 “I hope very much that Britain remains a member of the EU,” the Chancellor of the Exchequer told daily Die Welt in remarks published in German. “But for us to stay in the European Union, the EU must change.”

He indirectly criticised a German drive for closer coordination within the 27-country bloc as part of efforts to get at the root of problems behind the eurozone debt crisis.

“We welcome the euro being strengthened but we also want the rights of the countries that are not part of the euro to be protected under these changes, Osborne said.

Britain has belonged to what is today called the EU since 1973 but has not joined the 17-nation eurozone. British Prime Minister David Cameron is due to give a long-awaited speech later this month in which he is expected to offer a referendum after general elections in 2015 on taking back powers from the 27-member bloc.

On Thursday a senior member of parliament from German Chancellor Angela Merkel’s party said a referendum could “paralyse” Europe and said any attempt at “blackmailing” other EU nations would backfire on Britain.

“Britain would risk being isolated. That cannot be in Britain’s interests,” Gunther Krichbaum, the chairman of the Bundestag’s European affairs committee, told reporters as he led a cross-party delegation to London.

“You cannot create a political future if you are blackmailing other states. That will not help Britain.”

Osborne’s German counterpart Wolfgang Schäuble had already warned Britain in a newspaper interview last month against “blackmailing” its EU partners in a bid to bring powers back home from Brussels.

Germany and Britain have in recent months shared some common ground on the need to reduce EU spending although they differed on specifics at the latest budget talks in November.

The German legislator’s warning came a day after an unprecedented intervention on the issue from the United States, which is Britain’s closest international ally.

US assistant secretary for European affairs Philip Gordon told reporters at the American embassy in London on Wednesday that Washington wanted an “outward-looking EU with Britain in it.”

German Foreign Minister Guido Westerwelle said on Friday he also hoped that Britain would not leave the EU fold.

“In light of the current debate about the role of Britain in the EU, I say: Germany is keen to have a Britain that remains a constructive and active partner in the EU,” he told Der Spiegel magazine.

“The European house of the future, as before, will have various levels of integration but we would like to see a closer and better EU, of 27, with Britain.”