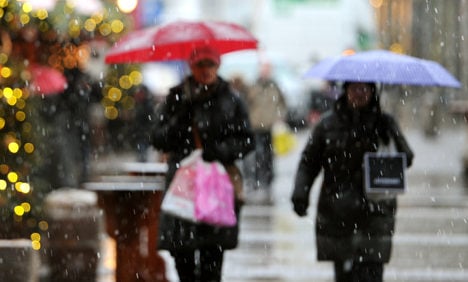 With cloudy skies and temperatures reaching seven degrees Celsius in the Upper Rhine region, Thursday should see the last of the unusually warm weather. But hilly regions should show signs of winter, as a light frost may develop.

As Thursday night gets underway, rain or sleet is forecast to fall across parts of the south and almost all of Germany’s eastern states. Everywhere else should remain dry with a scattering of clouds and temperatures with lows of minus three in the north east and three degrees in the southeast.

“We are as far from being hit with Siberian temperatures as we are from being hit by snow chaos,” meteorologist Martin Jonas from the DWD said on Thursday. But he added that, “the weather will be more ‘normal’ for January.”

Friday may see the first snow proper snow flurries of 2013 towards the Baltic coast. Elsewhere will likely just be wet though, as temperatures of between one and five degrees Celsius mean that it may be slightly too warm to snow.

But the DWD said temperatures would drop sharply come Friday night, as thermometers plummet to between minus one and minus six degrees. In areas unlucky enough not to have a warming blanket of clouds, it could be even colder.

People in Germany’s southern states on Saturday should find themselves waking up to very heavy cloud cover, which may even produce a few snowflakes through the course of the day. In the north it should be sunnier and in the east, snowy. Highs will be a chilly minus three in the east and one degrees in the south west.

Saturday night should continue in the same vain of half-hearted, intermittent snow and sub-zero temperatures. The north west is set for a particularly brisk night, with lows of -10 degrees Celsius possible.

For the parts of the north west, the cold night should give way to a clear, crisp Sunday. Lower areas of the south may be plagued with rain while higher areas treated to snow. Apart from a few warm pockets in the southwest, most of country should remain between minus three and zero degrees.

Heading into next week, Sunday night in southern Germany will likely still be in limbo between rain and snow and temperatures of around minus one degrees. The north should stay clear where temperatures could hit minus seven degrees.