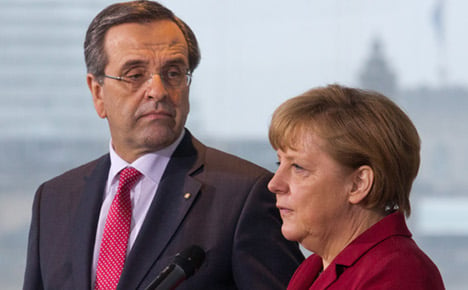 Samaras, who was in Berlin to attend a business conference, told reporters ahead of talks with Merkel at her chancellery that his country was implementing crucial reforms, even as average Greeks bear the brunt of the transition.

“I would like to make clear from the start that our country is making an enormous effort, which goes hand-in-hand with great sacrifices, to get things on the right track,” he said, flanked by the German leader.

Samaras trumpeted a “series of systematic measures” to “guarantee that we do the best possible to put things right, above all to ensure liquidity, which is the life’s blood of a healthy economy.”

“Those are, together with investments, the two elements that are crucial for our country – a country that is truly suffering a lot, above all in the grips of unemployment, especially among young people,” he said.

Merkel said she and Samaras would discuss what kind of headway Athens was making on putting its fiscal house in order, as well as challenges faced by Germany, Europe’s top economy.

“I am interested in hearing about progress on the implementation of the Greek reform programme and on the other hand to report what kind of economic situation we in Germany expect because we too must do everything we can to ensure economic growth and thus job security,” she said.

Merkel is a widely hated figure in Greece for championing painful budget cuts in exchange for European aid and faced sometimes violent protests during a visit to Athens in October to meet Samaras.

Greece has already received €34.3 billion of this package and is poised to obtain another €9.2 billion at the end of this month if key fiscal reforms are carried out, followed by two more slices of €2.8 billion in February and March.