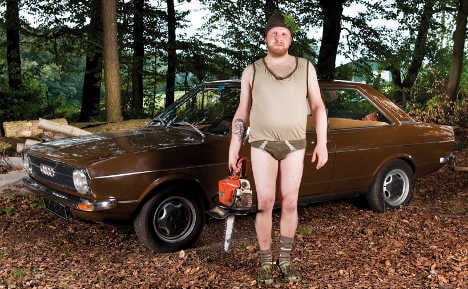 Janet Schürmeyer and Magdalena Schaarwächter started taking pictures of their male friends in front of polished-up cars of a certain age in 2009.

“I was doing my diploma in design and was making a car magazine aimed at women, which is when I came up with the idea,” Schürmeyer told The Local.

She and Schaarwächter, a photographer, worked together to make their first calendar, consciously making fun of the traditional calendars featuring bikini-wearing women lounging across high-powered cars.

“We only use male models – actually most are our friends – and they are often not wearing the most attractive underwear,” said Schürmeyer, speaking from her office in Wuppertal.

The cars they use are also not Ferraris or Maseratis but include a Citroen 2CV, an AMC Pacer and a Fiat 500. “There is a minimum age of 20 years for the cars. For the men it is 18,” she said.

They called their calendar Autowäsche, a combination of the German words for car and underwear. The subtitle reads, “Milestones of men’s underwear meets automobile history.”

Check out the calendar here!

Having started with a print run of 400 for the 2010 calendar, the pair have expanded to produce around 2,500 for 2013, as well as a range of table mats bearing a selection of cars and men in their pants.

Buyers are not only women, said Schürmeyer. “I would say it is about equal with men and women buying them. It is not a question of gender; rather it is a question of a person’s sense of humour.”

But she said she and Schaarwächter were not planning a calendar featuring women. “I don’t know if it would work with women. There are only a few calendars with men and cars and we have a niche now.”