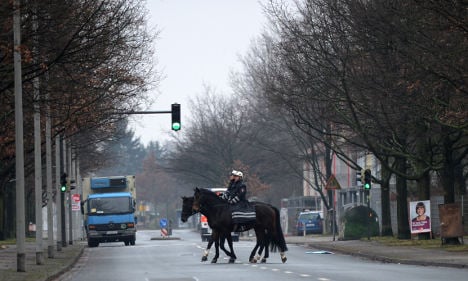 Authorities told citizens this week they had identified several suspected unexploded Second World War bombs buried in Vahrenheide, Sahlkamp and Bothfeld in the north east of the city.

In a disturbance to their usual Sunday activities, residents in a on-kilometre radius of the suspected bombs were asked to leave their homes at 9am as a safety precaution.

They were told not to return for an estimated six to eight hours while the bombs are either deactivated and removed, or detonated, the Hannoversche Allgemeine regional newspaper reported on Sunday.

Several businesses and old peoples’ homes were also evacuated as the bomb disposal unit began their work on Sunday morning. For those with nowhere else to go, a shelter for 500 people – with room for more if necessary – has been set up in gym of the Käthe-Kollwitz School on Podbielskistraße in the north east of the city.

Residents using the shelter have been advised to bring any necessary medical supplies, warm clothing and their own entertainment, wrote the paper.

“We won’t be getting a mobile library to park up in front and we aren’t exactly holiday rep entertainers,” Michael Hintz, fire brigade spokesman told the paper. Books, cards or small board games would be a good idea to bring along, especially for families with children, he said.

“Then in the gym you can invite your neighbour to play and make new friends,” said Hintz.

The fire brigade said it expected residents to be able to return to their homes by late afternoon. A citizens’ advice information hotline has been set up for those affected by the operation – call 0800 7313131.