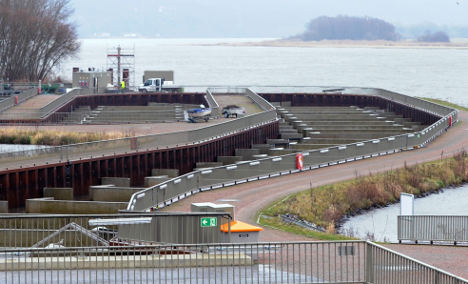 The two-and-a-half year-old fish ladder has been a resounding success, said owners Vattenfall energy company on Friday, with scientists from the Institute for Applied Ecology having counted one million fish passing through on their way to quieter breeding waters.

The 550 metre-long ladder, which consists of nearly 50 linked shallow pools, enables the fish to get between two parts of the Elbe cut off from normal flow with each other by the dam and new power station.

The water flowing between the pools must fall at the right speed – fast enough to attract the fish, but slow enough so that they are not stopped in their tracks by the stream.

To the delight of the ecologists, the ladder has attracted not only strong swimmers such as salmon, eels or sea trout and lamprey, but also typical Elbe fish such as sander, pike and catfish, which are generally thought to have a weaker migratory instinct. In all, 45 species of fish have so far passed through the facility.

Biologists and fish ecologists from the institute have been camping out every day at the top end of the ladder catching, counting, identifying, weighing and measuring the fish as they pass through before putting them back in the higher waters.

And they had their work cut out for them. On average 40,000 fish pass through every day, said Vattenfall, which invested €20 million in the facility. This week the scientists counted their millionth fish – a 50 cm long burbot weighing 972 grams.

Vattenfall agreed to build the ladder as a precondition for the construction of its nearby power station in Hamburg-Moorburg. Without it, migrating fish would not be able to get past a dam which was built near Geesthacht over 50 years ago.