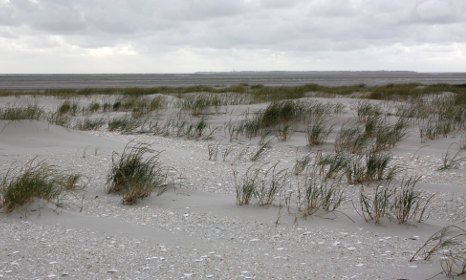 It has appeared out on the north end of the Norderoogsand mudflat, 25 kilometres off the Schleswig-Holstein coastline. The new land – the size of 20 football pitches – rose out of the water over a matter of years ‘like a volcanic island,’ according to Tönnig national park rangers.

“This hasn’t happened over 25 years of the national park,” head of the park administration Detlef Hansen told Die Welt newspaper on Friday.

The island has been growing since 1999 as water and wind currents shift sand and pile up the sand, wrote rangers in the SH Nationalpark Nachrichten Tönnig park magazine.

The biggest dunes are now over four metres high and partially covered with marram grass – a perfect sanctuary for birds to hatch and nurture their young.

And species previously unseen in the area are now coming to make use of the new land, say rangers. Where a decade ago only the odd herring gull and oyster catcher could be seen, the newly-formed salt marshes and dunes are now visited by around ten different species of bird.

“This has enormously raised the ecological importance of the Norderoogsands. It is to be hoped that the rare sandwich tern will also discover these dunes as a breeding place,” Thorsten Harder head of the Jordsand Association told the paper.