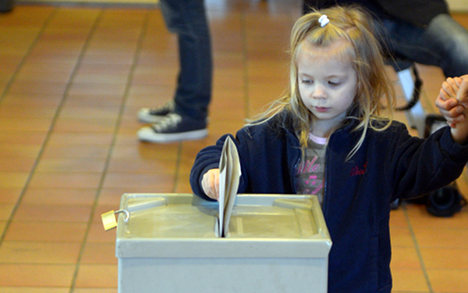 Dirk Niebel, Minister of Economic Cooperation and Development told the Westdeutsche Allgemeine Zeitung (WAZ), “We must give children a voice – in elections as well.”

The current age limit on voting in Germany is 18 which, he said, was “completely inappropriate” although he was not specific about when he wanted children to be given suffrage.

On a practical level, the Free Democrat (FDP) politician said that parents could take responsibility for overseeing their child’s vote or even using on their behalf. This would give families a louder political voice and force politicians to take children and families more into consideration.

He argued that denying the vote to Germany’s 17 million over-65s would be absurd, yet excluding children, a sixth of the country’s population, was accepted without question.

Ingrid Fischbach from the Christian Democratic Union, the governing coalition partner alongisde the FDP told the WAZ that “no one can argue against the idea’s charm” but that in reality “voting is a private matter and one that constitutionally cannot be exercised by a third party.”

She added that it would be hard to check whether parents were actually ticking the box their child had chosen.

Thomas Krüger, president of Germany’s children’s union, said that although he would be in favour of dropping the voting age to 16, and eventually 14, he disagreed with allowing parents a proxy vote for their child.

But support came from Paula Honkanen-Schoberth of Germany’s national child protection association who said children should have voting rights as soon as they were born.

She said that children were often under-estimated and studies showed that they demonstrated interest in political issues from as early as the third grade.