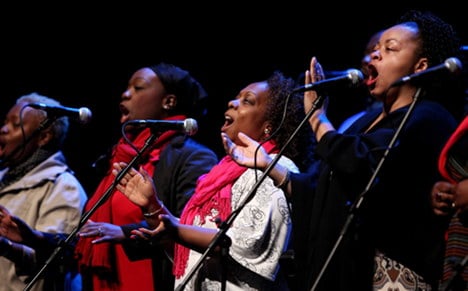 Las Vegas comedian Bethany Owen can impersonate everyone from Marilyn Monroe to Joan Rivers, making her the perfect host for “Divas – The Show,” a new theatrical production premiering Friday night in Berlin. Watch a talented array of glamorous ladies pay tribute to their vocal doppelgangers as they belt out the tunes of Barbra Streisand, Aretha Franklin, Amy Winehouse, and other queens of the concert stage.

Children’s Theatre at the Marchenhutte

There’s a fairy tale hut in a park in Berlin where classic characters from children’s literature prance across the stage. This weekend the actors at the Marchenhutte in Monbijou park perform Snow White, Rumpelstilzken, and The Frog King. The plays are in German, but these beloved stories are enchanting in any language, aren’t they?

Location: Märchenhütte, Monbijoupark, Monbijoustrasse (Across from the Bode Museum)

Art For the Whole Family – The Three Kings

“We three kings of orient are, bearing gifts we’ve traveled so far.” Three wise men came from the East, following the light of a shining star to find the newborn baby Jesus. So goes the biblical story of the three kings who offered gifts of gold, frankincense, and myrrh. Maybe you’ve got them in your nativity scene at home, maybe not, either way one thing’s for sure, these dudes don’t get enough of the spotlight at Christmas. Pay the guys a little respect Saturday when Berlin’s Gemäldegalerie celebrates the trio during a special museum tour for families.

The theatre stage is a magical place. Extraordinary sets transport the audience to a different time and place where art and fantasy merge. Cologne’s Museum of Applied Arts honours the tradition of stage design, complete with all the secrets of prop symbology and historical architectural accuracy in a new exhibition. See designs from the Weimar Republic, Walter Gropius’ Total Theatre, and the Opera Garnier in Paris.

Shake off the doldrums of your lingering New Year’s hangover with the most uplifting kind of concert out there. Led by the radiant Queen Esther Marrow, the Harlem Gospel Singers are belting their way around Germany this month with a stop in Frankfurt Monday. Their elaborately staged song and dance show will have you smiling for days. It’s a “Wonderful World.” “Let’s enjoy it while we can.”

No pink tutus here. The physically fantastic dancers in this mostly male troupe twirl and leap around the stage in suits and ties. Combining charm and energy in a sensational production that nods toward both Michael Jackson and Mikhail Baryshnikov, Rasta Thomas and the Bad Boys of Dance kick off a two-week run at Kampnagel Friday.

Albert Watson got famous shooting supermodels like Kate Moss and Naomi Campbell in the 1990s. His portraits of celebrities from Alfred Hitchcock to Mike Tyson are iconic. Recently the camera man’s travels have taken him to the cotton fields of Benin where he documented Africa’s cotton industry. His shots of colorfully dressed cotton farmers join earlier works from his oeuvre at an exhibition at Deichtorhallen Hamburg. Go and gaze into the eyes of beautiful Benin faces this week.

The Japanese photographer Hiroshi Sugimoto peels back the layers of the past by intensely focusing on reality. His work is created in photographic series based on a single subject like “Seascapes,” “Theatres,” or “Architecture.” His images offer a reductionist view of profound objects, places, or scenes while inspiring a dialogue that links Japanese traditions with Western thought. In a new exhibition at the Museum Brandhorst, fifteen meditative works comprise the series “Revolution.” Spend a winter day drifting among them.

The Anasazi were an ancient Pueblo peoples who lived in cliff dwellings in the Western United States and Mexico. The Navajo called them the “ancient enemy.” Louis L’Amour’s 1988 novel Haunted Mesa brings readers on a frontier adventure into the legacy of the Anasazi people. Read it and join the discussion at Amerika Haus Tuesday when the literary group meets for its monthly book babble.

Ever been ice skating dressed in traditional Bavarian garb? Yes, that means dirndls and lederhosen. Every Monday night is “Tracht on Ice” at the big ice ring at Stachus in Munich. Start the work week off right with a spin around the ice dressed like you’re in The Sound of Music. Those who prefer your more usual puffy jacket and mittens can go any other day, but do check the program for special events like “Ladies Night” and “Family Day.”