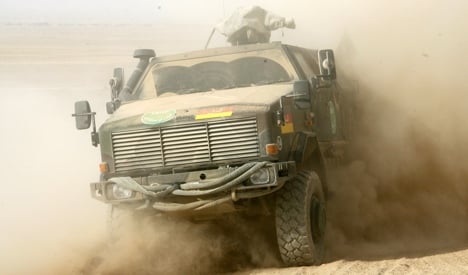 Quoting sources close to the talks on a deal, the Bild am Sonntag said Riyadh could eventually purchase up to 100 of the mine-resistant, ambush-protected Dingos.

The Dingo 2 is advertised by its maker Krauss-Maffei Wegmann as “the safest and best-protected wheeled vehicle in its class” with an “outstanding performance on extremely difficult terrains and under extreme climatic conditions.”

The vehicle is also fitted with a nuclear biological and chemical protection system.

Germany’s national security council of which Chancellor Angela Merkel is the chair is still to make a final decision on the deal but has already given the green light in principle, said the weekly.

Saudi Arabia has repeatedly shown an interest in German tanks.

For decades Germany has declined to sell such heavy weapons to Saudi Arabia because of concerns over human rights and fears for Israel’s security.

Opposition politicians and even some members of Merkel’s ruling centre-right coalition had slammed the reported tank sale, particularly in light of pro-democracy uprisings throughout the Middle East.