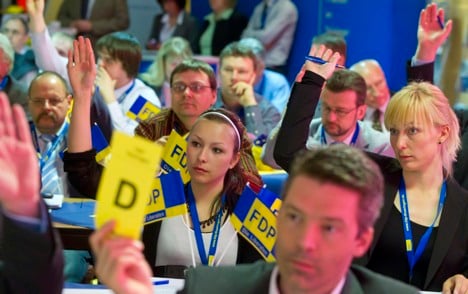 The pro-business Free Democratic Party (FDP), the junior party in Angela Merkel’s centre-right coalition, lost some 5,400 members in 2011, and another 3,000 in the first six months of this year, putting the official membership at 60,181.

But the FDP leadership under Vice Chancellor Philipp Rösler has refused to release figures for the second half of the year until after a meeting of coalition leaders in January. Nevertheless, the fall is likely to have continued, the Frankfurter Rundschau newspaper reported on Saturday.

“We have no indications that there were significant membership increases,” admitted party spokesman Wulf Oehme. Regional party branches have all reported membership declines in the past few months.

A similar fall in the second of this year is likely to put FDP party membership well below that of the Green party, which gained 650 members this year, putting the official total at 59,727 as of mid-December.

“The FDP is in a vicious downward circle,” said Berlin-based political scientist Oskar Niedermayer. “No-one wants to belong to the losers.” He put much of the blame on the Rösler’s enduring lack of popularity.

Focus magazine reported on Saturday that the SPD had overtaken the CDU as the biggest German party by membership, with 483,000 members, losing “only” around 6,000 members in the past year. The CDU lost over 9,000 members, and dropped to 480,000.

The socialist party The Left’s membership is also declining, sinking to below 70,000 for the first time earlier this year.