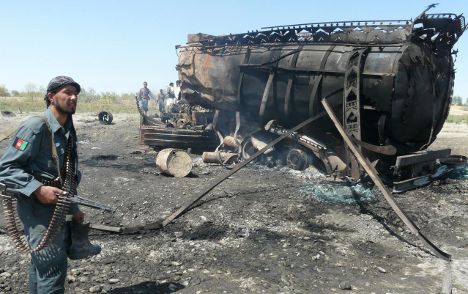 Karim Popal, an attorney representing the plaintiffs, said the 10 lawsuits were claiming €3.3 million ($4.4 million) in damages from the German government.

“Many orphans and widows lost their providers due to this barbaric war crime, and many mothers their young children,” Popal said in a statement. “Nearly all the survivors are traumatised and are not receiving psychological treatment.”

Around 80 people are represented, according to news agency DPA.

A spokesman for the regional court in the western city of Bonn told AFP that it had received 10 complaints claiming damages from the German government but declined to provide further details.

Popal had already filed class-action lawsuits in 2011 demanding $33,000 per victim and said the plaintiffs were still awaiting a ruling from the same court in Bonn.

In response to a sharp rise in attacks on foreign forces, a German commander on September 4, 2009 called in a raid near the northern Afghan city of Kunduz. The strike claimed 91 victims according to the German government and up to 142 people including dozens of civilians according to Afghan officials.

The bombing prompted public outrage just weeks before a German general election, forcing the defence minister at the time to resign and putting Chancellor Angela Merkel under pressure to clearly define her Afghan policy.

In 2010 the defence ministry approved compensation of $5,000 per family. A ministry spokesman said 90 families had received payouts to date.