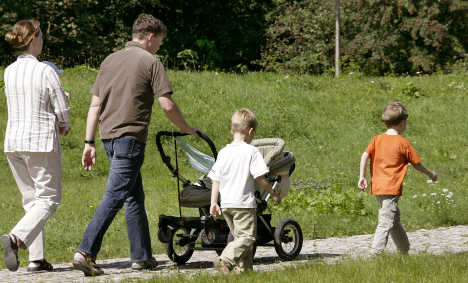 “On the one hand, there are many women who are forced to let go of their careers more than they would like to,” Andrea Nahles, general secretary for the centre-left SPD, said on Thursday.

“And on the other hand, we have fathers who would like to spend more time with their children.”

Faced with a falling birthrate, German politicians have been under increasing pressure to come up with policy solutions. A study released last Monday showed that the country is becoming a less attractive place to have children, due to difficulties reconciling family and work.

Germany, whose birthrate currently stands at just 1.39 children per woman, has one of the highest number of childless women worldwide.

The SPD’s candidate for chancellor, Peer Steinbrück, is said to back the proposal to cut working time for parents. Nahles said the government could cover some of the costs for a period of two to three years.

“We want to even out the ‘rush hour’ of life between the ages of 25 and 40,” she said. “It might also help women avoid the career setback that comes with being out of the working world too long.”

But the proposal has come under fire from the pro-business Free Democrats, who are in coalition with Chancellor Angela Merkel’s conservatives at the federal level.

Nahles’s counterpart in the FDP, General Secretary Patrick Döring, told Berlin’s Tagesspiegel daily that the SPD had lost touch with reality in its drive to win over voters.

“A 30-hour workweek for a large part of the population is something that Germany cannot and does not want to pay for,” he said.