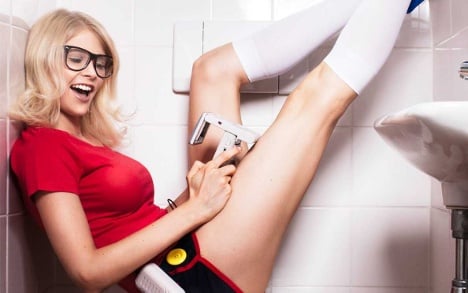 The Nerd Dreams Calendar every month presents a classic computer being operated by a young woman.

The oldest device in the collection is the Commodore PET 2001 from 1977, presented by Steffanie in an office, but the calendar also includes much-loved historical milestones for the sad-and-lonely everywhere, such as the Commodore C64, the Atari ST, as well as a number of Macs from the early days of Apple.

Check out the calendar here!

The calendar was conceived by the three self-confessed nerds, though the pictures were taken by Anna Schnauss in Frankfurt. “We sub-contracted everything that had nothing to do with computers,” said Nerd Dreams’ Henning Schneider.

But unfortunately for Henning, few of the models consider themselves actual tech geeks or gamers – except for Scarlett, who presents the Sinclair ZX81 dressed as Lara Croft. “I like first-person shooters the best,” she said during her photo-shoot in a Frankfurt bar.

“We just wanted to make the calendar that we always wanted ourselves,” said Nerd Dreams programmer Jan Kaufmann from Karlsruhe.

The makers also added that the calendar was designed to be “suitable for work.”