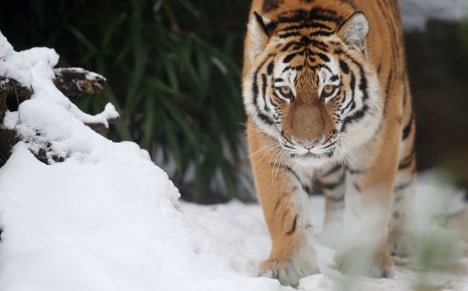 We’ll admit we have a soft spot for mankind’s fuzzy friends, and, frankly, so does Germany. Here are the animal stories that moved the country in 2012.

One of our favourites of the year concerned animals even more fearsome than tigers – Tyrannosaurus Rex – which German scientists said were actually downy rather than scaly, somewhat dampening their reputation for toughness. Their babies were positively fluffy with little feathers, palaeontologists in Bavaria said.

A three-week-old orangutan baby became the newest star attraction at the Frankfurt Zoo. Named Sayang, Indonesian for “darling,” the cute primate has stayed clutched to the chest of its mother Rosa since birth, making it impossible to determine if it’s a boy or girl.

The earless bunny known as Til.

The one which caused most heartache in our office was the tale of the earless rabbit which died after being stepped on by a hapless cameraman – who had been invited to film the bunny’s introduction to the world.

Nelson the parrot – too ugly for his parents.

Hopes that rejection by his parents would lead to global stardom for Nelson the baby parrot at Leipzig Zoo were destined to be doomed – although he was dubbed the ugliest bird by many papers, someone forgot to tell him his feathers would eventually make him look just fine.

An even more tragic tale was to be found in August when police officers spent their day using their ingenuity – and olive oil – to free a squirrel from a tight spot, only to find it died from stress just a few hours later.

Berlin’s other famous bear Bao Bao, the oldest male captive panda in the world died this summer aged 34. He never became a father, much to the frustration of those wanting him to become star of a breeding programme, instead remaining a life-long bachelor, rejecting all the ladies who tried to catch his eye.

Three young wolves managed to completely freak out a German soldier who was on a night exercise – by diligently stalking him, stopping when he stopped and getting closer when he walked, just like a game of “What’s the time Mr Wolf?”

One of the oddest zoo animal attacks of the year involved a six-foot giant otter who attacked a cleaner after escaping from its enclosure in Hamburg Zoo. Two men who tried to pull the animal off the woman were also bitten.

A man who wanted to launch a pet tattooing service by inking a Rolling Stones tongue logo onto his pony was told to put his ink away and stop being silly. A court in Münster said this was against animal cruelty rules – not because the pony in question might have been more of a Beatles fan, but because the process was deemed to be too traumatic for an animal to be undertaken so lightly.

Three kangaroos escaped from a wildlife park near Frankfurt without jumping anywhere – using holes dug by foxes and wild boar to slip under rather than over fences. How we wished there was some evidence of cross-species teamwork behind the tale.

The most serious animal escape of the year was in Cologne, where a tiger got free and mauled a keeper to death before the zoo director shot the feline dead.