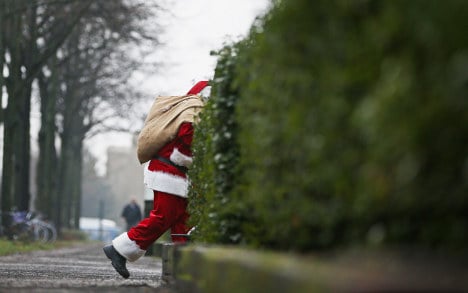 The German Weather Service (DWD) said on Monday that some people in the southern regions of the country could be celebrating Christmas in shorts and T-shirts, as temperatures would well into the double digits.

But the north-east was expected to remain cool, with just six degrees in areas like the Uckermark, but even this was too much for winter sports in the central Harz mountains where the tourist board said only a few ski runs remained open.

The 60 centimetres of snow that was seen on Sonnenberg for example in the middle of the month, has shrunk to around 25 centimetres, while the area was expected to be as warm as eight Celsius with rain on Monday and the coming few days.

Rain and snowmelt had the River Rhine threatening to flood in some areas, with the Cologne High Water Protection Centre registering a level of more than eight metres on Monday. It was rising by around three centimetres an hour. Ships are banned from travelling there as soon as it reaches 8.30 metres.

Cologne’s old town centre was not yet affected in the middle of the morning, and does not generally flood until the Rhine reaches at least nine metres. But flood protection measures, such as mobile walls were being set up on Monday in case the river were to continue rising.

Although the warm weather this week feels unseasonable, the DWD said it was not so unusual at this time of year.

Thomas Ruppert from the DWD said even the top expected temperatures of around 18 degrees this week were, “not something to knock you off your stool.”

“A Christmas thaw is a common phenomenon,” he said, pointing to the end of the 1970s and early 1980s when such conditions repeatedly stymied hopes of a white Christmas.

Tuesday is expected to be rainy for many areas, with temperatures between eight and 13 Celsius, and snow only in upper Alpine areas.

Wednesday will be cloudy with showers and although temperatures are expected to fall a little, they will still remain between five and ten degrees.