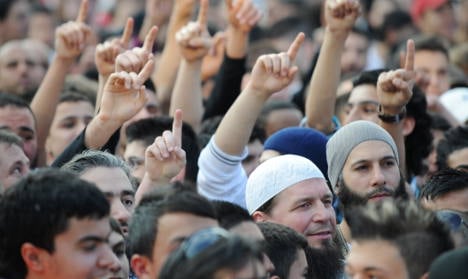 Burkhard Freier, head of the state’s Office for the Protection of the Constitution, told the Welt am Sonntag newspaper that it is difficult to get people out of radical groups once they’ve joined.

Freier said his office will work closely together with Muslim organisations to provide ways people can opt out of the groups before becoming too entrenched.

He wants Muslims in Germany to know that the opt out program is about getting out of radical groups and not “getting out of Islam, which we respect.”

His office estimates that the number of extremist Salafists in North Rhine-Westphalia has doubled this year to 1,000. The effort with local Muslim groups comes after attempts at using hotlines to get people to either not join or quit such groups were less than successful.

Militant Salafist groups have been in the news a lot lately. On Thursday such a group released a video calling on followers to take German hostages to free an Islamist now serving a six-year sentence for stabbing two policemen in Bonn in May.

Last week German prosecutors said they believe Islamist extremists were behind a botched bomb attempt at the Bonn train station.