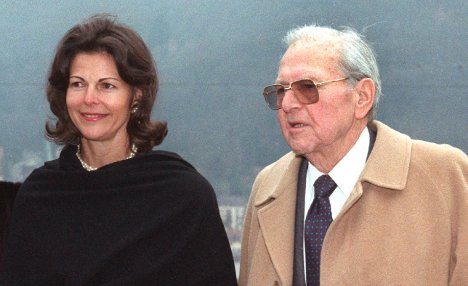 Queen Silvia and her father in 1990. Photo: DPA

The Queen launched her own probe into her father’s alleged Nazi ties after a slew of reports claimed that Walther Sommerlath, who died in 1990, had joined the Nazi party in 1934.

In 2009, TV4 investigative news programme Kalla Fakta (The Cold Facts) also reported a widely rumoured story that, upon his return from Brazil as part of the so-called Aryanisation of Jewish assets in Germany in 1939, Sommerlath took over a factory which was owned by prominent Jewish businessman Efim Wechsler.

Sommerlath reportedly took over a Berlin factory from Wechsler in return for a Brazilian coffee plantation and land in 1939, a trade that facilitated Wechsler’s emigration to Brazil from Nazi Germany.

Sommerlath, however, denied his involvement with the Nazi Party until his death.

After an investigation continued over the next two years, the queen on Thursday put the case to rest in a six minute video published on the website of the Royal Court website, together with the publication of recently discovered documents on the case.

“I am relieved that I have now brought these hidden documents about my father and Efin’s fate to the light,” Queen Sylvia said in the video.

“Perhaps many have wondered why I haven’t answered questions about my father before. It wasn’t only sensitive work but it was hard to handle. It takes time. And it’s perhaps not so easy to always do so in the public eye.”

The investigation was mostly carried out by Erik Norberg, a history scholar and the secretary of the The Royal Swedish Academy of Letters, History and Antiquities (Kungliga Vitterhetsakademien), the board of which includes the king, the queen, and Crown Princess Victoria as honourary members.

Norberg published the findings in a book, The Forgotten Documents – The Story of Walther Sommerlath and Efim Wechsler.

“What the queen wants to say is that now everything has been done in order to find the documents about these family histories,” he told the TT news agency.

The queen has also written a new forward and afterward to Norbergs book herself, Ternert added.