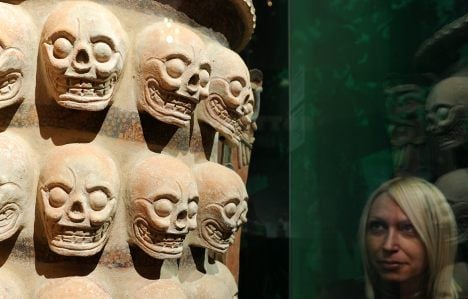 The global media has been enjoying an apocalyptic field day with the ancient Mayan calendar, said to end on December 21, but Germans have so far remained largely immune to the doomsday fever.

An international survey conducted in May by the agency Ipsos found that only four percent of Germans believe that the Mayan calendar “marks the end of the world” in 2012 – the fewest of the 21 countries surveyed, and well below the 10 percent global average.

But that’s no reason to ruin a good excuse to party, and Lars Frühsorge, a Maya specialist at the University of Hamburg, is organizing one of the biggest in Germany – to mark the end of a Maya exhibition at the Museum of Ethnology, Hamburg. The event brings together real Mayans, North American Shamans, Tarot card readers, yoga teachers, Tibetan singing bowl therapists, meditation instructors, and a few scientists.

Party at the end of the world

“The original idea was to invite some contemporary Mayans from Guatemala, and do more of a normal museum event, but because the esoteric scene was there, we thought we’d do a combination of the two,” Frühsorge told The Local.

As the ethnologist pooping the esoteric party, Frühsorge sees his job in the project as “seeking dialogue” with the alternative lifestyle scene. But he admitted there might be some friction. “It’s a question of what you believe in,” he said. “If I want to say something about the Mayan culture, I would refer to the historical texts, whereas an esoteric would say, ‘I meditated, or I tried certain drugs, and then I saw a vision, and then an alien told me something.’ And then we won’t necessarily have the same opinion.”

Wearily, Frühsorge explained that the whole Apocalypse hype is a wilful misunderstanding of the Mayan “long count” calendar. December 21, 2012 is simply the end of a 5,125-year cycle.

He said that two Mayan priests, Juan Ixchop Us and Fabián Frias Santillán, have been invited to the “Transition of the World party” in Hamburg, and they won’t be hiding in the cellar or invoking the wrath of ancient gods. Instead, they are using the media hype as a chance to draw attention to their culture.

“They say, ‘because it’s a big date, we can draw attention to the fact that we, the Maya, still exist,’ ” said Frühsorge. “They want to make public the ecological problems, the poverty, the cultural discrimination that they have to contend with in Guatemala and Mexico.’ ”

But if the world does end on Friday, who can a good taxpaying German turn to? The Federal Office of Civil Protection and Disaster Assistance (BBK) of course. But they are not losing sleep.

“It’s a scenario we have not dealt with, because we think it’s nonsense,” a spokeswoman told The Local. “What are we supposed to tell people, except that from a professional point of view it’s not an occasion that we are going to prepare for?”

But the spokeswoman did say there may have been one positive effect of the Mayan hype – a slight reduction in public complacency. Germans, she said, are alarmingly underprepared for emergency situations, whether it’s flaming death from the sky or a power cut. Very few people keep two weeks’ worth of provisions in their home, as the BBK officially recommends.

“That’s the dilemma,” she said. “We very rarely have situations like in 2005 in Münsterland, when a larger area had no electricity for several days. So the population there was completely left to its own devices – no heating, no cooking, no shopping, no light, no telecommunications, no chance of getting cash from the bank – all that in winter. That happens very rarely, so people don’t prepare for it, because they think, ‘oh, that’ll never happen.’ ”

Jürgen W. Schmidt, business consultant and survival advisor, does not believe in the Mayan apocalypse either, but he does believe the human race has reached “a turning point in time.”

“You don’t really need to believe in it – you can see that the pace of change is accelerating – the euro crisis, the Arab Spring, natural disasters,” he told The Local.

He says he’s not the only one to have noticed. There has been a marked increase in interest in his “survival seminars” in the past few years. And he offered some tips, if you want to make some last-minute preparations.

“I travel a lot. In the places I go I usually have a few extra provisions stored,” he said. “I normally have my water filter with me, so I’m not dependent on the water of some emergency services – I can use it in any puddle. I have fuel with me, so that I can stay warm in at least one room in the house when it’s say -10 degrees outside. And I also have an emergency rucksack so that I’m always able to sleep rough for a few days if necessary.”

And for anyone really expecting Mayan fiery death on Friday, the German internet forum “End of the World 2012” offers some useful tips to note down before a giant solar flare fries the world’s electricity and telecommunications networks.

“Well, I’ve already set up my emergency generator,” reveals user Surfingbird. “The diesel should last for four weeks… I also have a lot of torches, kerosene lamps, and batteries. On the 20th I will move into the air-tight room. It’s already pretty cosy, but the installation of a toilet, shower, and food etc has made it pretty tight. The 5,000 l water tank should also last a while. If the TV works, I can watch TV, or a DVD.”

But user Lugke is more concerned with the best weapon to have in a post-Apocalyptic scenario. “I’m leaning towards the crossbow,” he said. “Easy to use and to shoot. The bow and arrow needs a lot of practice … the bullet situation will make any rifle useless some time soon. It’s not like I want to play war games, I want to secure my survival.”