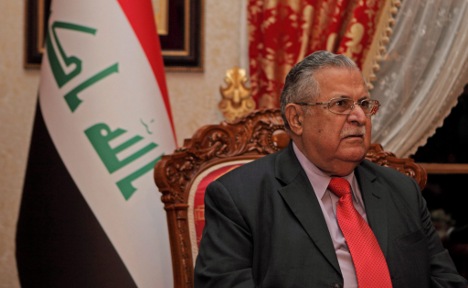 Talabani departed “the Medical City hospital in Baghdad, heading to the Federal Republic of Germany, under the care of a specialised medical team,” the presidency said on its website.

Talabani was hospitalised late on Monday after what state television reported was a stroke, but doctors have said his condition has improved. He has had a series of health problems in recent years.

Talabani underwent successful heart surgery in the United States in August 2008. The previous year, he was evacuated to neighbouring Jordan for treatment for dehydration and exhaustion.

He has also travelled to the United States and to Europe for treatment for a variety of ailments.

Talabani has been a key figure in Iraqi politics for decades, first as a Kurdish rebel and political leader, and as president since 2005.

Since becoming president, he has won praise for attempting to bridge divisions between Sunni and Shiite, and Arab and Kurdish factions.

During the past year, he has repeatedly sought to convene a national conference aimed at reconciling feuding Iraqi leaders.