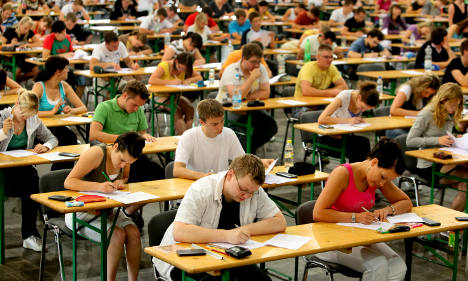 When 80 percent of students graduate with one of the top two grades, questions start being asked. When you learn that this figure was 70 percent as recently as 2001, alarm bells start to ring.

A report published last month by the German Council of Science and Humanities into marking practices across the nation’s universities has drawn attention to these disquieting trends. It may provide welcome reassurance to anxious German students swotting for examinations, but makes otherwise for uncomfortable reading.

Wolfgang Marquardt, head of the Council which produced the report, did not mince his words in describing the situation to The Local. “The grades which students currently receive say almost nothing meaningful about their real achievement,” he said.

The statistics which leap out of the report make it easy to see where Marquardt is coming from. What does it mean to achieve a “very good” or “good” in Art and Art History, when you’re joined by 96 percent of all candidates? Likewise for social science, where 89 percent emerge with top grades.

Law and medicine stand out as the only two subjects in which the majority are still deemed only ‘satisfactory’ – for all other subjects ‘adequate’ has fast become the new fail.

An optimist might applaud rising performances – and this is a line many individual universities have taken in defending their results. Others are more sceptical.

“Good results can sometimes simply reflect the quality of students,” Matthias Jaroch, spokesman for the German Association of University Professors and Lecturers, told The Local. “Some universities have become more selective about the students they admit, driving up standards.”

But he was keen to emphasize that this doesn’t provide an adequate explanation for the scale of the increases being registered.

“There are also political influences on the situation. Essentially politicians want as many students as possible to go on to university – and once they get there they want them to complete the course and to succeed,” he said.

Marquardt believes that the universities themselves are complicit in the process: fiercer competition between institutions and courses to attract students – and the funding which they bring – may have encouraged them to lower the hurdles placed in front of students. “There is a reluctance to put potential students off with arduous testing,” he suggested.

Then there’s the personal dimension. “Professors don’t want to undermine the life chances of their students by handing out poor marks. They know just how vital these grades now are in determining a student’s future life chances, and to some extent they just feel unable to dish out damning grades,” said Marquardt.

“Nowadays we have this preoccupation with superlatives. Everything must be the best, must be excellent. But what we need is a bit of honesty – to say that ‘good’ really is ‘good’, and satisfactory really is good enough. At the moment we seem to divide everything into two categories – exceptional, and bad,” he added.

Germany isn’t the only country struggling with this; almost every western society has been hit by the phenomenon. In Britain, the number of students getting first-class degrees has increased by 125 percent in the past decade, according to statistics from the Higher Education Statistics Agency. Similar trends have been noted across North American colleges.

This doesn’t mean that the effects aren’t real – and damaging. “Employers are struggling to use university grades to make decisions about applicants, because they really say so little about them,” according to Marquardt. “Many smaller firms in particular can get seduced by the marks which an applicant has, without having any means of evaluating them in context.”

Universities, too, are apparently having a tough time selecting the best candidates for progression to Masters programmes. Sorting the wheat from the chaff, it appears, has never been more difficult.

“We badly need some more objectivity in the system,” said Marquardt.

What both Jaroch and Marquardt fought shy of admitting was that academic standards themselves could be slipping as a result of the rampant grade inflation. They were clear that they didn’t see this as the main problem.

“I don’t think examinations have got easier: it’s just that better marks are being handed out for the same performance,” insisted Marquardt.

Given the lack of any comparative data, the question cannot be settled definitively. But anecdotal evidence, at least, indicates such confidence might be misplaced.

The situation which one recent finance and business studies graduate described to The Local made it clear that widespread knowledge of lenient marking had turned many of her courses into farcical operations.

One student Jessica, who didn’t want her surname published, described how the whole class would troop up one by one to deliver comically under-prepared presentations, universally culled from Wikipedia the night before – and would then all walk away clutching top grades.

“We were happy, because we had the marks we needed without having to work too hard. The professors put up with it because they came out of it looking good, as all their students had great marks,” she said. “Actually, it was almost embarrassing.”