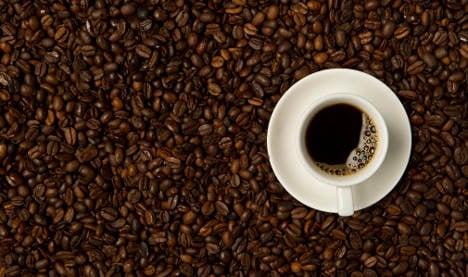 In a trendy coffee shop in a Berlin side street, three men are crouched in front of a row of gleaming coffee machines. They rock back and forth nervously, like athletes psyching themselves up before a race.

A low buzz of animated conversation fills the room, and the crowd crane their necks to watch the proceedings. A man steps forward with a microphone and begins the countdown. The chatter falls away, replaced by the throbbing hum of the machines as they whir into action: the city’s first ‘Black Coffee Brew Down’ competition has begun.

“I’m a professional barista,” says spectator Wissem Ben Rahim. “But I don’t feel ready to take part in the competition yet. Today I’m just here to watch. You really have to invest a lot of time practicing before signing up.”

The atmosphere is certainly intense. Behind the scenes, the judges treat their craft with the utmost seriousness. One of them, Cory Andreen, proudly boasts the distinction of reigning world champion coffee taster.

Like wine experts, they swill the coffee around their mouths before spitting it out. In pursuit of scrupulous fairness, samplings are conducted blind. Triumphing in the competition is apparently mostly a question of avoiding mistakes.

“The easiest way to explain quality coffee is that it starts with the farmer,” explains Andreen. “If it tastes interesting, what you´re trying to do is not screw it up. It´s about taking a good coffee and letting it shine for itself.”

To the casual coffee drinker, the reverence afforded to the humble bean can seem baffling, but the sense of mission here is unmistakeable. In fact, the ‘Black Coffee Brew Down’, organized by the Berlin Coffee Society, is a clear sign of just how far elite java culture has come in the German capital.

Jasper Springerling, head coffee roaster for Bonanza Coffee in Berlin’s Prenzlauer Berg neighbourhood, isn’t here for pleasure alone: “I have a feeling there’s a bit of an emerging coffee scene here in Berlin with independent roasters, so I’m here to see the new faces,” he says, noting that Bonanza supplies around fifteen other coffee shops in the city.

“It’s a small scene, so everyone knows each other. Now there’s more competition, so that raises the standards and pushes the limits of coffee how to make it best,” he says.

All three judges agreed that Berlin is witnessing something of a revolution where it comes to upmarket coffee.

Bonanza Coffee, owned by judge Kiduk Reus, is credited with breaking the ice and introducing the capital to what is frequently termed Third Wave Coffee, a movement which treats coffee as a high-quality, artisanal product.

“We did everything differently, just focused on the coffee. There was also a major internet dimension of blogging about the coffee and creating a community,” says Korean native Reus.

That was five years ago. Since then a string of upmarket independent coffee shops have opened, catering above all to young, affluent, cosmopolitan crowd. Last year saw the foundation of the Berlin Coffee Society, which includes Bonanza, Cafe CK, Double Eye, Five Elephant, Godshot, No Fire No Glory and Oslo Kaffebar. Regular events, such as this competition, play a crucial role in developing the scene.

“They make people re-focus on their craft. It´s not about putting people on the back foot or being critical, but about getting people to think about their brew and what other people were doing better,” says American Kris Schackman, the third judge and owner of Five Elephant in the Kreuzberg district.

Quality is the buzzword and the obsession of the specialty coffee scene: all other considerations are secondary to the pursuit of the perfect brew. Paying up to six times as much for the beans, purchased through ‘direct trade’ with local growers, is seen as a worthwhile investment to ensure the best possible product. “What we sell is completely different from what you buy in the supermarkets,” insists Reus.

Foreigners at the fore

The coffee aficionados are also emphatic about what is driving the movement here in Berlin: foreigners.

All three judges, each at the forefront of city´s coffee scene, are expats, though the owners of the independent cafe No Fire No Glory, host of this year’s brewing competition, are Berliners.

The atmosphere at such events is thoroughly international. English appears to be the lingua franca, though the rules of the competition were announced in both English and German.

“Over half my customers are expats. Mostly from countries which already have a strong coffee scene, like London and Sydney. There is a growing German customer base, but most of them were first brought in by expat colleagues. Most Berliners haven’t heard of us, but the shop is featured in lots of guide books for tourists,” says Andreen.

The other judges nod their heads in agreement: their business is also heavily reliant on the city’s international crowd.

“Germans have some kind of stigma about this kind of coffee. They´re used to this really dark filter coffee that their grandmothers drank, which put them off, though that´s changing. Germans are less adventurous,” said Shackman.