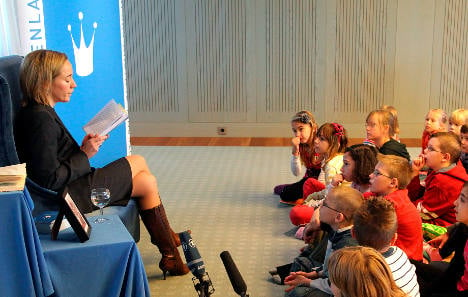 When Pippi Longstocking’s father is referred to as “Negro-King” or Jim Button is called “Negro-Baby” (in the 1960 children’s novel by Michael Ende) Schröder intends to “replace them on the spot while I’m reading, in order to protect my child from taking on such expressions,” she told Die Zeit weekly.

“Even without bad intentions, words can cause damage,” she said. “When a child is older, I would explain what kind of history the word Neger has, and how hurtful it is to use that word.”

Depending on how it is used, the German word Neger can mean anything from the outdated and inappropriate term “negro” to the seriously offensive “nigger” in English.

It was the first time the family minister had revealed her personal opinions on raising children, and talked publicly about raising her 18-month-old daughter Lotte.

She also described Grimm’s fairytales as “often sexist.” “There is very rarely a positive female character in them,” she said, which is why she intends to read other stories as well as the Grimm classics, to give her daughter other role models.

Perhaps more controversially, the minister also said that she intends to stop pretending that Father Christmas exists “as soon as the first doubts appear.” She said she would then tell her daughter, “Father Christmas is just a nice story.”

But though she said honesty is very important to her when raising her child, she said there was one situation where she would always lie – when parents realize that they love one child more than another. “[One would] have to be very rational and absolutely never show that. Never. That really is an iron rule,” she said. “That is one of the few situations where I would definitely lie.”